The First 100 Years of the Cape of the Virgins Lighthouse

In April of 1904 the light of this black and white lighthouse, 26 meters tall, was turned on for the first time. The lighthouse is located in a precarious spot, bordered by the Strait of Magellan and battered by winds that can reach over 100km per hour.

In this place live the caretakers, who take turns doing the various jobs in accordance with the seasons and amount of daylight: in winter they have to turn on the light at 5 in the afternoon and keep it on until 10 in the morning, when it becomes bright again. Their responsibilities also include taking care of the building and performing official meteorological readings.

For one year now, the lighthouse has been the sight of an office of the National University of Southern Patagonia, dedicated to studying the history of this place and also to serve as a base for scientific missions, the majority of them foreign, that arrive at this place.

A different panorama greeted the first explorers when they arrived to the end of the world. 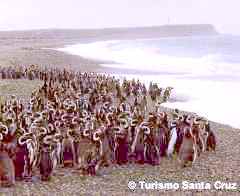 The Cape of the Virgins was discovered by Magellan on the 21st of October of 1520. The cape received this name because it was the “Day of the One Thousand Virgins.” It was also on this promontory, or very close to there, where the first settlement in Patagonia was founded: The Ancient City of the Name of Jesus. It didn’t last long. Tragedy was its destiny: the men who stayed there died of hunger and sickness, due to the impossibility of obtaining food. Very close to there, another place carries in its name the hardship that faced the first inhabitants of the zone: Puerto Hambre, or Port of Hunger.

Various centuries passed before this end of the world became known for its more positive characteristics, though not peaceful ones: the costal sands were discovered to be filled with gold at the end of the 19th century… And Gold Fever arrived, and with it hundreds of adventurers, entrepreneurs, andsmugglers who would quickly but transiently populate this place. 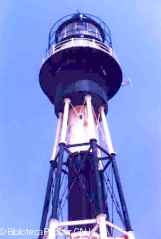 It was in the midst of this madness that the 20th century arrived in this part of the world, and along with it the construction of the light house. Today, in a manner unimaginable to its creators, a telephone booth has been installed at the sight, permitting one to communicate with anyone in the world, a world whose horizons are moving closer.