Trains in Patagonia: the facts

Traveling by Train is romantic. It makes us imagine that we are time travelers. To enter that world of rolling wagons, dampened noises and smooth wobble is an unforgettable experience. If we add the fact that through the windows the legendary Patagonian landscape reveals, there is only one possible conclusion… We have to do this trip! 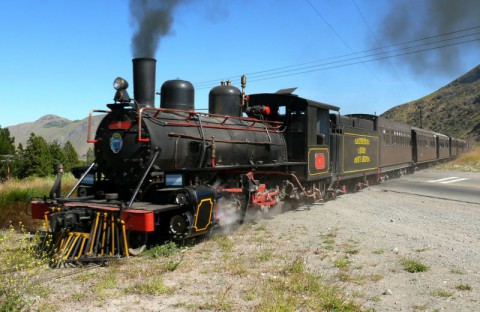 What you need to know:

– There are no train services that allow us to travel by train throughout Patagonia. Many travelers are enthusiastic about this idea but, at least for the moment, it is not possible.

– Except for the Patagonian Train (Viedma/Bariloche), the rest only operate as a Day Tour departing and returning to the same destination where the main station is. Distances are short and these Trains include either a Tourist Guide or Audioguide, Gift shops, etc.  Tickets for these Tourist trains may be obtained in advance via a Travel Agency.

– During peak season (summer in the southern hemisphere) it is advisable to book in advance, especially for the Patagonian Train.

From the Atlantic to the Andes range, the Patagonia Train connects Viedma with Bariloche, along a route that borders Meseta de Somuncura. 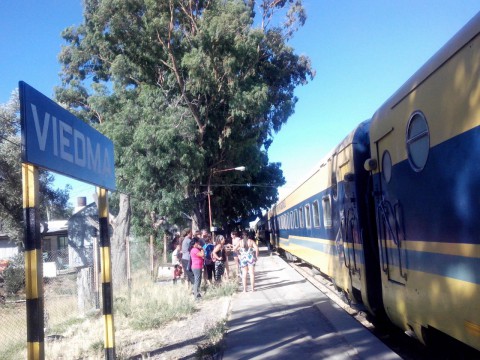 The train passes through several towns of the “Southern Line” of Río Negro Province: Valcheta, Sierra Colorada, Los Menucos Maquinchao, Ingeniero Jacobacci. It is more than 800 kilometers along the Patagonian steppe. 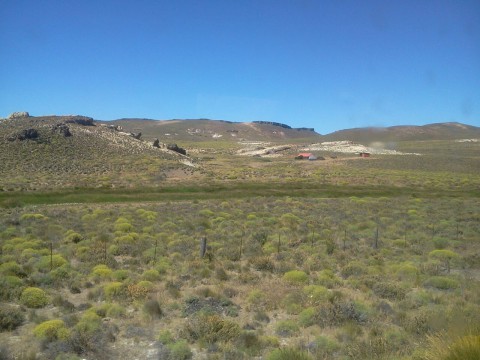 Between the steppe and the pre-Andes

The train offers Tourist, First, Pullman and Cabins wagons. It also has car trays so that passengers can ship their car and travel comfortably to fully enjoy the saved energies upon arrival.

On-board services include a dining wagon, with a menu of Patagonian specialties for dinner, cinema wagon (free for passengers on Cabins) and a Disco. The latter two services are not available in all configurations, ask when purchasing the ticket.

You need to make reservations in advance as places sell out quickly. See Services and Schedules (in Spanish).

Also known as “Old Patagonian Express” this is the famous train of small gauge (75 cm. to be precise), with a steam locomotive built in 1922 as part of a project to link the Atlantic Ocean and the Andes Range. 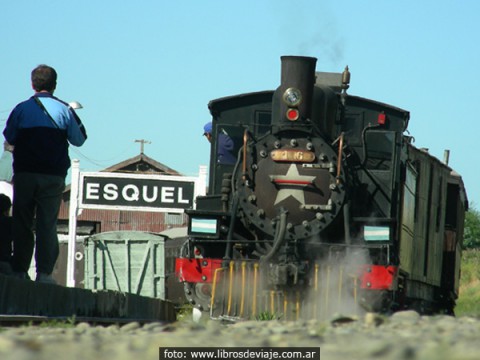 However only the segment from the Patagonian plateau to the foothills of the Andes, between Ing. Jacobacci and Esquel was bulit (402 km), and its opening took place in 1945.

This Train not only is a relic for its locomotives and wagons, but also for the architectural work of the track layout, almost “handmade”. The workers had only pick and shovel, and some dynamite to perforate the mountain. The layout has more than 600 curves to prevent slopes from exceeding the capacity of the locomotives. There are also several bridges and a tunnel near Rio Chico. In addition, there are culverts along the roads carved in stone. 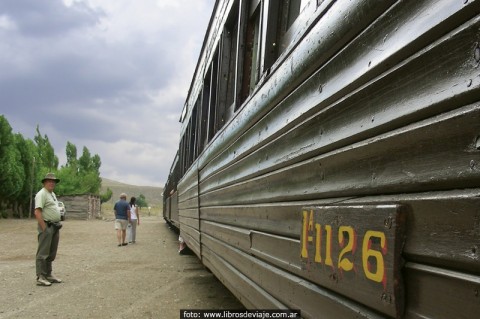 Currently it runs a short tourist service between the town of Esquel, west of Chubut, and Nahuel Pan Post, formerly the first station of the journey. A distance of 36 km across the steppe where a bridge crosses the Esquel stream and then the cord Nahuel Pan, the highest in this part of the Andes, is skirted. In the village of Nahuel Pan live many Mapuche descendants who are dedicated to cattle raising and also organize a crafts fair at the station, for each arrival of the little Train.

The journey itself is a captivating, moving and unique experience in the world. Make sure you read this.

The biggest attraction is its locomotives Baldwin ( U.S. ) and Henschel ( Germany ) that are kept running as they originally left the factory. They operate on  fuel oil, a petroleum derivative and are driven by a boiler that produces steam and produces that  “chuff chuff” sound that makes it so special.

It is called “Trochita” for its super narrow gauge of 75 centimeters, created for short stretches in the First World War. The enormous distance developed by this branch added to the difficult terrain that required it to move at low speed, gave birth to the need to have a dining car which is still part of the formations. Along with its passenger wagons they constitute museum pieces in perfect condition .

These first and second class wagons retain details of the era, with leather and wooden seats, iron railings and the famous salamander inside, very useful for the cold winters in Patagonia and for the passengers, who used to heat water for “mate” and fix some fast food to eat while traveling… 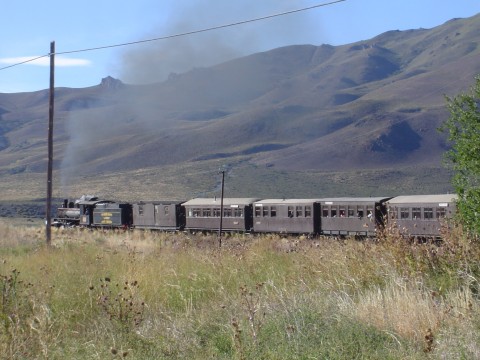 The Trochita has two museums; one in the station of El Maitén, by the general workshops and another at Esquel station, which retains a lot of mechanical parts, tools, office items, tickets and even a bicycle with a very special history…

What’s included in the ticket?

– R/T journey either from Esquel to Nahuel Pan or from El Maitén up to Thomae detour.

– Guided tour of the Railroad Museum of Esquel or El Maitén, depending on where you take the train.

Beyond this, we must bear in mind that El Maitén it is a “town museum” rail. You can see several houses built with railroad ties and maintenance workshops of La Trochita where spare parts for the Train are manually reconstructed.

Train of the End of the World

El Tren del Fin del Mundo is one of the emblems of Ushuaia and Patagonia. Its history, like the one of the city itself, is tightly connected to the prisoners in the old Jail of Ushuaia. 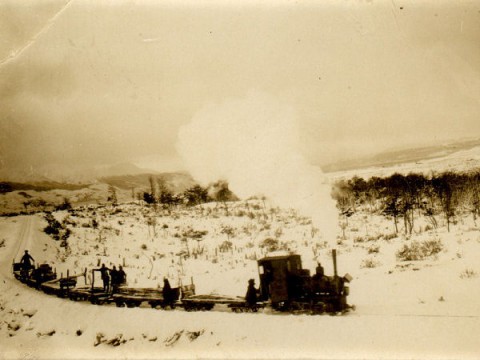 Today, far from those roofless cars prisoners moved by force of arms alone, the train has a heated steam locomotive and wagons that carry visitors from the End of the World Station at the, up to the Parque Nacional Tierra del Fuego train station, near the access to the National Park.

The train currently circulating, called New train of prisoners, is the result of a tourism venture that rescues through a guided tour the history of Ushuaia, the train and the Presidio, as part of the Fuegian forest is traversed. 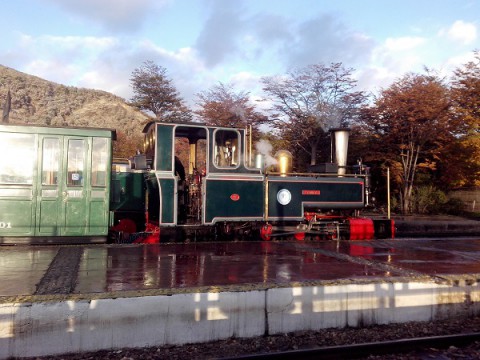 The construction of this railway is completely new, since the original elements were not preserved. At the Jail Museum part of the ways and other elements of the original formation can be watched. 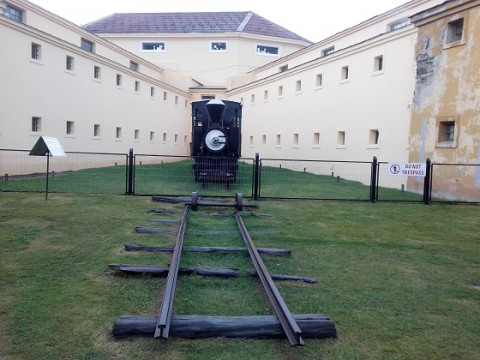 At the End of the World Station there is a bar and a boutique where you can buy souvenirs from the train. In addition, a photographic journey allows to know the history of the construction and use that was given originally to this train.

Total length is some 7 km. long, bordering River Pipo, along what the last part of the original route was.

The guides tell the history of the train and Ushuaia while through the large windows, the dense forest of lengas and coihues of Parque Nacional Tierra del Fuego reveals.

Midway, in the Cascada de la Macarena Station, the train stops and passengers can get off for a short hike to a waterfall. There is also a reconstruction of a Yamana village.

Elsewhere on the tour you can see part of the forest cleared by prisoners.