The Old Patagonian Express Railway adds yet another attraction to its tourist circuit. 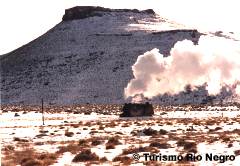 On one hot January afternoon, the passengers who had boarded the train looked out their windows and saw a group of men on horseback, with their faces masked in bandanas, just like the bandits of the old West. They rode closer to the train and held it up, in the middle of the Patagonian steppe. The “bandits” got on the train, drew their “arms” and began to ask for money from the passengers, the majority of them being foreign tourists.

After a few minutes, the fear turns to applause and laughter as the “bandits” explain that they are really just townsfolk from nearby Esquel and that the hold-up is merely a dramatic recreation. And, of course, this train robbery, as in the ones of yesteryear, would not be complete without a kidnapping. One lady traveling with the passengers is abducted and carried away by one of the horsemen! However, she is a plant, and is none other than his own wife! The “thieves” also announce that all of the money they have collected in their hats will be taken to soup kitchens that feed the needy children of the city of Esquel.

One purpose of this reenactment is to bring to the leisurely travels of the Old Patagonian Express Railway the legends of two other bandits who in the past traveled the wilds of Patagonia: Butch Cassidy and Sundance Kid. However, this is a pure anachronism. These two outlaws arrived in South America before the train did. But we can let our imaginations run away on our trip on the Old Patagonian Express.