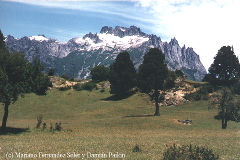 Most of the National Parks are located on the Andes, on western Patagonia. They conform a long corridor consisting of thousands of protected hectares, with flora and fauna species that are unique in the world, some of them endangered.

You can now learn all about them; their names, where they are, how they were created and, most important, how to get to each of them.

The National Parks Administration is the official authority of all Parks, which has recently enabled the possibility of buying admission tickets online.

We will start to describe them following a southbound route along the Andes and then back to the north but along the Atlantic coast.