Located in southwestern Tierra del Fuego province, over the borderline with Chile, this National Park is the southernmost example of the Andean – Patagonian forest. It was created in 1960 and has a surface of 63.000 hectares.

In this area the final part of the Andes features a northwest – southeast orientation. The peaks alternate with valleys where there are rivers and glacial originated lakes. Two types of forests predominate here: those of Lenga and Guindo trees, with an open underwood mainly consisting of moss and fern. 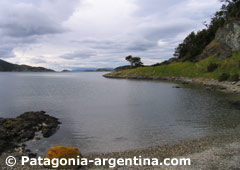 In the spaces within the forests there is plenty of peat in very humid, flooded areas where the sphagnum moss grows.

On the sea shore, the two great bays (Lapataia and Ensenada) deploy in gorges and beaches that are full of white cauquenes. There are also black eyebrowed albatross (over two meters long) who cohabit with the steam duck and the diving petrel. There is also a rare kind of otter named chungungo.

Other species are the guanaco and a particular Tierra del Fuego variety of red fox. The Canadian beaver, an introduced species, has caused a great environmental impact because it cuts down trees in order to build dams which, in turn, provoke floods in certain parts of the forest where the trees also die as a consequence of the excess of water.

A bit of history 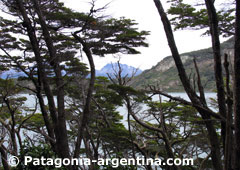 The primitive inhabitants of this region were the yámanas aborigines who lived in huts at the Lapataia Bay area. Their food was mainly seafood. Nowadays it is possible to spot the “concheros”, circles where mollusks accumulated meaning that there were settlements around.

Access to this Park is via National Route 3, 11 Km. to the west of the city of Ushuaia. Many daily flights connect with Buenos Aires, in 3 and a half hours flights. 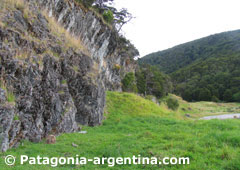 Inside the National Park there is an organized campsite, near Lake Roca, as well as many free camping areas. But the ideal place is the city of Ushuaia itself, which features great tourist services suitable for different budgets.

There are many trekking paths inside the Park, that can be easily followed:

Black Lagoon: Only 400 m. from Route 3 you arrive to this lagoon, which is dark colored due to the presence of peat. 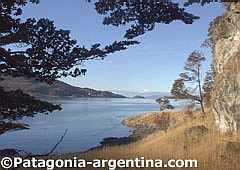 The Island: it consists of 800 m. along the coasts of rivers Lapataia and Ovando, over archipelago Cormoranes.

The Lookout Point: From route 3 you directly access Lapataia Bay, walking along a lengas wood. From there you get to the lookout point which offers a magnificent panoramic view of the bay.

Meet the beavers: After some 400 m. up to Los Castores stream, you will be able to observe the dams system these incredible animals have built, as well as the environmental impact it causes.

Vacation packages to National Parks starting at USD 1.330
A week at the End of the World Best Tours Included
Ask now!