It used to be part of Nahuel Huapi National Park until 1971, when it became an independent National Park. The reason for its creation was the preservation of a wood that is unique in the world: The Arrayanes Wood, at Peninsula Quetrihué, on the north extreme of Lake Nahuel Huapi in the Neuquen province.

This Park’s total area is 1,753 hectares, where 20 of them which are close to the coast (in the south of the peninsula), belong to the Arrayanes Wood. 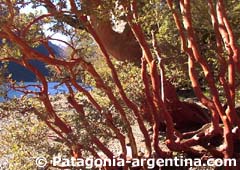 The Arrayanes are trees of white flowers and cinnamon colored rinds. They feature irregular white spots and are cold at touch.

You arrive at this National Park through Lake Nahuel Huapi, up to Puerto Arrayanes, or by land, taking routes 237 and 231 from San Carlos de Bariloche up to Villa La Angostura, the town right next to the Park. From this Villa there is a beautiful path, some 7 miles long, that leads to the Wood.