Our family trip to Patagonia

We are from Spain and wanted to set up a family travel itinerary, together with a group of Argentine friends, to the deepest Patagonia. 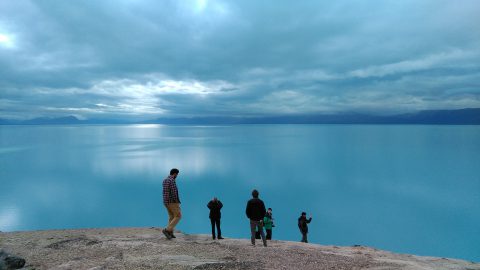 Part of our group, ecstatic staring at the immense Lake Argentino.

Traveling grupally with friends or family requires much more planning than doing it alone or as a couple. But the idea of ​​going in a group is fundamental in our way of traveling as we have fun, lots of fun. Of course, the preparation of a group trip requires commitment from each and every one of the participants during the “in the meantime” stage.

After a lot of research online and with the recommendation of our friends “in situ”, we finally agreed on an itinerary. And we decided to get as far as Tierra del Fuego (the tip of South America) and the ultra famous Perito Moreno Glacier on a trip of about six days, plus some extra time in Buenos Aires of course.

Although the initial plan in our group was self-managing everything concerning reservations, we ended up hiring everything through a travel agency in Argentina. A wise move, judging by the positive results, the care provided and final cost.

The first thing we agreed on with the group was the month: October, as it is not yet peak season (better prices) and spring is already noticeable.

We traveled to Patagonia by plane starting in Buenos Aires where we had arrived from Europe a few days before. This city is the capital of Argentina and where our local friends live. We flew to Ushuaia, Tierra del Fuego. It is a direct flight (3 hours) and you reach the continental end, the “Southernmost South”. The plane lands in front of the Beagle Channel! This fantastic postcard gave the group the official welcome to Patagonia Argentina. We were at the End of the World!

We arrived at about sunset and after leaving the luggage in the hotel we went out to walk through the port and the center of the city, very close to each other, to then self-indulge in the “gastronomic welcome” with a dinner based on the star food of the island: the king crab. Its  meat is pink and served with pasta… it was a true glory for our senses.

The next day, the first one with  planned excursions, they came to pick our party of 12 up in order to go to Tierra del Fuego National Park, which is near the city. A beautiful landscape with lots of vegetation, where the Andes mountain range merges with the Atlantic Ocean. The youngest of the family were delighted with the ride on the Train of the End of the World, which offers a not very extensive tour on a train that resembles a toy: as small and picturesque. It is an ideal excursion for families with kids, very calm and pleasant.

The third day we were transferred to the port in the morning to make the beautiful navigation through the Beagle Channel. Our agency wisely booked us so as not to take the ordinary catamarans but to go on a smaller vessel instead, with a maximum capacity of 26 persons aboard. This allowed us to get much closer to islets with sea lions, penguins and a variety of marine fauna that left us gaping. We arrived as far as the Les Éclaireurs lighthouse, ill-named Lighthouse of the End of the World. The real one is actually called San Juan de Salvamento and is located on the Island of the States, far from Ushuaia and there were never any excursions reaching there …

That same afternoon after navigating, the whole group went to the Museum of the Jail at the End of the World where the most remote prison on the planet was in place. Not to miss this visit.

Fourth day of our grupal adventure in Patagonia: we crossed the Andes and visited the Fagnano and Escondido Lakes, with the plus that the route we were signed up for was done in off-road vehicles bordering the lakes, off the beaten path as opposed to the regular excursions we learned that were available too. They even offered us a picnic lunch at a shelter that we thoroughly enjoyed and during which a very special moment took place: we were thrilled to see us all, friends and family together in the midst of such an overwhelming scenery of beauty and pure nature, all sharing the same table. It was touching.

The next day we continued our way to El Calafate. The flight from Ushuaia is very short (less than an hour) and when arriving it seems that there are more hotels than houses, which struck our attention. Later our group guide told us that this village has grown exponentially since the creation of the airport, more than 15 years ago. And since then, lodging establishments have proliferated.

Without a doubt the must visit here is to see the Perito Moreno Glacier, inside the Glaciers National Park. Our family longed for this for years, we watched documentaries on TV at home and we dreamed of being able to get here someday… 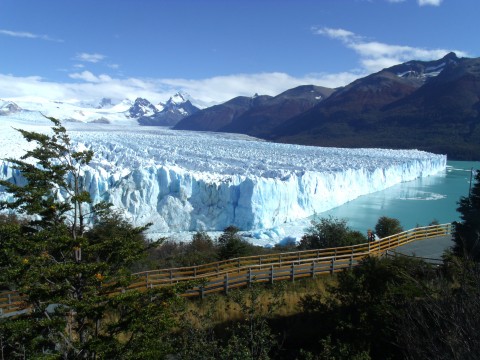 We were driven some 70 km by paved route from town until we reached the famous footbridges and runways system of the National Park that, with its different levels, allows to observe the majestic Perito Moreno Glacier in all its splendor and spectacularity. There are no words to describe this unique and unrepeatable Natural Monument in the world.

The glacier is immense, white, blue, catching. In the midst of the silence of the forest (and of the whole group as no one spoke a word) the crashes of enormous blocks of ice constantly roared over the water.

The following day we enjoyed a navigation in Lake Argentino, visiting other glaciers and arriving up to a Estancia. Here again the gastronomy had its second stellar moment in the trip, and the typical Patagonian lamb to the embers was more than delicious.

One more day had elapsed, and it was the last one in Patagonia. We eventually boarded the flight towards our final destination for this family vacation in Argentina, again the city of Buenos Aires where we’d fly back home from.

Everything, absolutely everything we have seen during this trip is so beautiful, so unique. And being able to make it to Patagonia with the family and our group of friends was a dream come true.

Patagonia Tours
Absolute Argentina
The ideal trip for those willing to know Argentina's travel icons: Perito Moreno Glacier in El Calafate, the End of the World in Ushuaia, the indispensable and mysterious Buenos Aires and the new Wonder of the World, The Iguazú Falls. A combo that lacks nothing, with...
Adventures in Patagonia
A trip designed for active travelers and thrill-seekers! It combines the two most emblematic destinations: El Calafate, the capital of the glaciers, with Ushuaia, the icon of the End of the World. In each place, the selected hotels, the excursions and the services chosen make...
A week at the End of the World
This is a journey to the End of the World, reaching the mythical Tierra del Fuego and then visiting the Glaciers National Park and the deservedly famous Perito Moreno Glacier. Simply put, it is a seven days journey of non-stop beauty, distributed across the cities...
Extreme South Tour
An ideal option to get to know Extreme Patagonia, visiting two major sites: first, a visit to the majestic Perito Moreno Glacier with its magic and mysterious deep blue ice (UNESCO World Heritage Site) and finally, Ushuaia's charm and uniqueness, the "Bay facing dusk" in...
Deep Patagonia
An ideal option in order to get to know three of Patagonias major sites: first, the Atlantic Ocean littoral, Puerto Madryn and Valdes Peninsula, a UNESCO World Heritage Site; later, a visit to the majestic Glaciers National Park and Perito Moreno with its magical, blue...