The Spanish Colonizer had received from Carlos V permission to conquest and populate the lands of the Río de La Plata (silver river), which was certain to be rich in gold and silver, and to also stop the Portuguese advancement into the area. 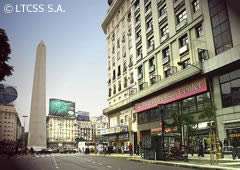 It was for this reason that Don Pedro de Mendoza arrived with an expedition of 1500 men at Riachuelo de los Navíos (today this is the location of the Boca neighbourhood) and later studied the zone, erected a primitive settlement of straw and mud huts, a chapel and a humble military fort, in what is now Parque Lezama.

In the region the Querandí Indians, a nomadic tribe, encamped and from the beginning they established a peaceful commercial relationship with the settlers and exchanged meat and fish for Spanish goods. But later they rebelled against the large daily demands of the settlement, and refused to exchange food. This condemned the Spanish to a starvation so severe that “they were forced to eat their clothes, shoes, and even each other” according to the German Ulrico Schmidl, one of the first chroniclers of the city. 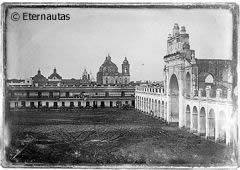 A wave of attacks and counterattacks culminated four years after the founding of the city when the Quarandí Indians destroyed the settlement, forcing the colonizers to return to Spain.

Don Pedro de Mendoza died on the return voyage, before reaching his destination.

This is what the history of Buenos Aires records as its first founding. But some historians claim that for a city to be founded, it needs to erect a church, a cabildo (town council) and a military fort. Therefore, as Don Pedro de Mendoza never founded a town council, some claim that this was not an actual founding of a city. 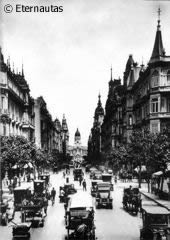 The second and definitive foundation of Buenos Aires was carried out by Juan de Garay, who on the 11th of June of 1580 found a settlement near the river shore and re-baptized the city “Ciudad de la Trinidad” and the port Santa María de los Buenos Ayres. With time, the city recuperated the name Buenos Aires.

The land suitable for farming was distributed among the first residents of the city, which was designed according to the Laws of the Indies. It was a rectangle with each corner extending to a cardinal direction: 144 blocks separated by streets. The Plaza Mayor (Main Plaza, the same as present Plaza de Mayo) was the central block and was surrounded by the most important  buildings: the cabildo (town hall), the church and the governor’s house. 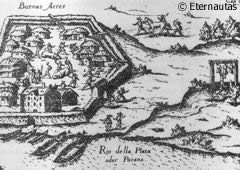 As the years passed the growth of Buenos Aires was slowed for two fundamental reasons: the permanent attacks of the Indians and the fetters placed on its commercial development. Far from being the route to riches, the city was passed over and limited. Lima, Peru continued to be the central port of the Empire and from there the Viceroy exercised a monopoly over the commercial trade with impeded the development of any other port.

This changed in 1776, when Buenos Aires was named the capital of the Viceroyalty of the Río de la Plata and began to transform itself into an important port and customs house. Its success was also linked to the contraband and smuggling activity.

In 1880 it became the capital of the Republic of Argentina and separate from the Province of Buenos Aires.

Until 1994 it was dependent on the national government and it was administered by an appointee of the President. After 1994 it became an Autonomous City and governed by a mayor elected by popular vote.