Signed by the magnificence of its buildings, the exquisite details in its architecture and the eclectic styles,  Buenos Aires is a unique and absolutely personal Babel. 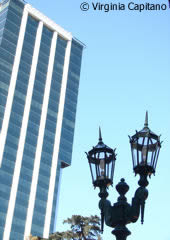 Names such as “The queen of the Río de la Plata” and “Latin America’s Paris”, are common in travel literature regarding Buenos Aires. The most sophisticated trends can be found in this capital city. These styles were adopted in order to show the “last European tendencies that were in at that time”, such as baroque, art nouveau, neoclassic, renaissance, art deco and modern buildings that started to merge with the new modern symbols in imposing skyscrapers with neon lights and little colonial vestiges that we may find.

Actually there are little signs of this colonial past, most of those signs can be found in the so-called “historic core” of the city, located near Plaza de Mayo, but most buildings are neo-colonial that tried to reconstruct the beginnings of this style. In 1880 Buenos Aires transformed from a village into a city. 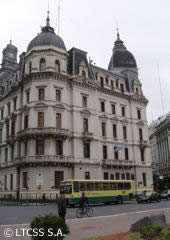 The big urban growth that began at those times modified the customs and lifestyles of its inhabitants. The Art Nouveau buildings of the Avenida de Mayo start to appear, which remind of Madrid’s Gran Vía, with a Spanish style in its costumes and “a bit more French” in its architecture characteristics. The imposing domes, statues and figures of the buildings stand out from and the building style stands out. The “high part of the Avenida de Mayo” is emphasized because the ground floor of some shops and the remodeling thereof of the last few decades do not correspond with the higher part’s splendor.

The Recoleta neighbourhood, as the exclusive Palermo Chico area, are defined as “Buenos Aires’ Paris”. There, we find the charm, style and distinction of the European great capital where the big French palaces shine and the bar-related customs and walking its streets among shops of international brands and the most imposing buildings. 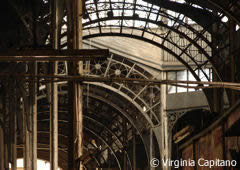 While we may sometimes find in the whole city a mixture of buildings and details of different styles in a single block, each neighbourhood is usually characterized by its own features.

These are the colorful La Boca neighbourhoods and the customs of the newly arrived immigrants that formed it, and the San Telmo neighbourhood with its bohemia and its unmistakable porteño antique dealers, at least for its international recognition.

The Palermo neighbourhood is also one of the places where we may find the backyards of Borges’ childhood, in spite of the building recycling of the last two decades, when Palermo was the end of the city and it constituted a place for crime or love, a piece of the porteño identity where we may rebuild the its history.

From an urban perspective, there is a city that corresponds to each one of the collectivities that settled with the indigenous population. This diversity has given a special charm that is translated into a strange mixture of Latin-American and European elements. The principal references remind of Spanish, Italian and French places, presented in distant times.

In the past few years Latin-American colors have been adopted by the immigration from different  countries, that leave a print of their style and  customs in the neighbourhoods of the city.

Some people consider it a WELSTAD, that is to say, a global city, a city for everyone, with arms wide open to influences and to be enriched by the cultures of the world that populated it and that gave the city the very particular air that makes it so unique and personal.