When people visit El Calafate and the Perito Moreno Glacier they often aren’t conscious that they are walking on a land that carries with it a terrible social and political history that was one of the worst moments for Argentina.

On the route that leads from the town of El Calafate towards the Perito Moreno Glacier, or more precisely, 28 km from the town, you will pass by Estancia Anita. It is an estancia (ranch) of more than 74,000 hectares and is one of the largest of such establishments in the Province of Santa Cruz. It is a typical estancia of Patagonia: it is still dedicated to raising sheep and the exploitation of wool, as it was when it was founded. You can see the structures from the route, including a plate fleecing shed. In the back, there is a mountain ridge called the Barrancas de Anita, and is the home of condor nests. 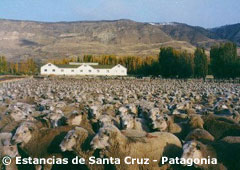 When you see this barn, stop for a moment and try to imagine a history not that far in the past: in this wood barn, hundreds of workers were corralled and gunned down because they tried to defend their right to strike, against their bosses but in favor of a contract signed with the government of Buenos Aires. 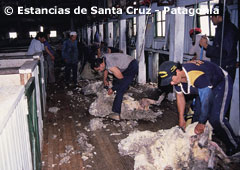 The events of Estancia Anita were made known contemporarily due to the book written by Osvaldo Bayer and the movie by the same title, “La Patagonia Rebelde” (The Rebellious Patagonia) which takes place during a series of repressive actions against workers, student and peasant movements in the history of Argentina.

In the year 1921 workers and peasants of the extreme south, comrades in wind and silence, were killed by soldiers from Buenos Aires. These were the times of Yrigoyen, the first election won by the radical party (UCR). They were killed for going on strike. They were not asking for a lot: 100 pesos salary per month, that the instructions on medicine bottles be not written in English, and that they be given a box of candles every month. The agreement to do so was signed by the government a year earlier, but the bosses never followed it. And when the workers complained to the government, the same government that had signed the agreement, killed them in cold blood.

The land of Santa Cruz is full of graves without names in the middle of the emptiness. It is told that no one approached the graves because they didn’t want to be associated with the strikers, and therefore no one even marked them with a simple cross. Those who died were criollos, descendents of the Spanish and of the Indians, in addition to Chileans and anarchists from Europe. No one cared who they were, only that they disobeyed the land owners.

Who ordered such a large repression? The national government did so because the British government asked them to, because they could not tolerate to have their interests disrespected. And the estancias of Patagonia had English owners.

However, nobody took responsibility for the massacres. Varela, the military commander sent by the government, said that “the orders that the president had given have been completed” and “there is nothing to investigate.” In far away Buenos Aires the opposition asked for explanations, but none were given and it was impossible for the congress to form an investigative commission. The anarchists continued protesting, until one of them, the German Kurt Wilkes, killed Varela with a bomb and several shots. He was later sent to prison and killed there, and his comrades finally killed the jailer who killed him. And with this act the tragic killing came to an end. It had began on the 7 th. of December in 1921, in Estancia Anita, in the far off west of Santa Cruz, so close to the Perito Moreno Glacier, which at that point was not the tourist attraction that it is today.

It seems like no one remembers what happened today in El Calafate. But there are various options to visit Estancia Anita. One of them is an excursion called “Barrancas de Anita,” which will take you to the low lying mountains behind the barn, where the condors nest. 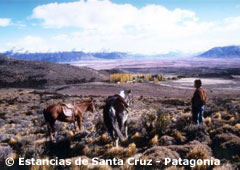 Also, in one of the sections of the enormous estate, the house of the señor Braun has been turned into an elegant tourist establishment, Alta Vista. With prior permission you can visit the house and see how the old owners used to live.

And finally we, conscious travelers, will know to hear in this plateau wrapped by wind and silence, the voice of those who one day died for a little more justice.