Welsh cake, despite its name, did not come from Wales. Actually, it constitutes a sign of the strength of the first Welsh settlers who arrived in the Valley of the Chubut river and how they faced the difficulties the environment presented. 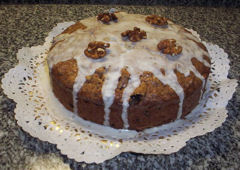 On July 28th, 1865 a hundred and fifty three Welsh people arrived in the coasts of the Chubut river aboard the Mimosa clipper. Theses men and women came sailing from Wales.

They wanted to escape from the English harassment and to keep their traditions, culture and religion. The Argentinian government wanted to populate and to defend their large territory that was occupied by indians and that was constantly threatened by the foreign invaders who came by sea and land.

It wasn’t easy for the pioneers. They had to face among many things, the lack of drinking water and the shortage of food. While men traveled the surrounding areas looking for a place with drinkable water and shelter for the winds and the possible attacks, women tried to get by with the little food they had and to make them last. 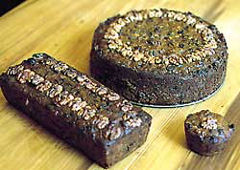 This was how a group of families gathered and mixed all the ingredients they had at hand: flour, brown sugar, nuts, sweetened fruits, honey and other ingredients. The result was a cake that had two fundamental characteristics: a high caloric value and it lasted for a long time.

When the bad times were through and the settlers and their descendants could finally feel at home in this far lands, an extra tradition had been added to the ones they brought from Wales: the famous Welsh Cake.

Each family has its own recipe and their secret ingredient to give it a special flavor. Apart from that, there is a established recipe in which the most important ingredients are the care and the time you devote to each ingredient. It is said that preparing a good Welsh Cake takes 45 hours!

A beautiful tradition linked to Welsh Cake that newlyweds follow in Chubut: when they prepare the wedding cake, the bottom is a welsh cake. The day of the party they eat the whole cake except for that part, which is carefully wrapped and kept in a can. The couple will eat a slice of it every month during the first year as a symbol of  overcoming difficulties.