The waterfalls were discovered in 1541 by Adelantado Alvar Núñez Cabeza de Vaca. 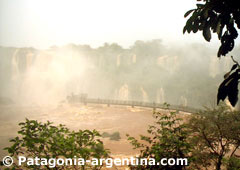 Alvar Núñez was a different type of conqueror. It is enough to say that the book he wrote about his experiences is called Shipwrecked . . . although he set course for Río de la Plata he landed in Brazil and had to walk to Paraguay, where the spaniards had escaped from the Indians.

This march was ripped out of the script of a Hollywood action movie. Thousands of disasters, natural and man made, Indian wars and then alliances with tribes that helped him cross the jungle. And that is how in August of 1541 he discovered the waterfalls, “where the water hits the ground with such force that it can be heard for from faraway, and the mist is so tall that it could easily cover two ships”.

In the Guaraní language, still spoken by the Indians who inhabit the region (and it is the second official language of Paraguay) Iguazú means “big water”.

This was only the discovery by white men. Many years would pass until settlers populated the area.