To visit the Iguassu Falls you must get to Puerto Iguazú. This town is very well connected with the main cities in Argentina. 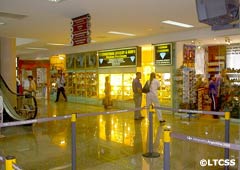 The Iguazú International Airport receives flights from the main cities of Argentina, with frequent daily flights from Buenos Aires, the capital of the country.

By bus, the most important companies that connect Buenos Aires to Iguazú and other cities are: Crucero del Norte, Expreso Singer S. A. Expreso Tigre Iguazú and Via Bariloche.

By car, it can be reached via Posadas, the provincial capital, by National Route 12. This same route, which borders the Paraná River , connects to Route 9, which is an access route to Buenos Aires. Another option, for those who are coming from Buenos Aires is to take National Route 14, which borders the Uruguay River, and later meets up with Route 12 via Provincial Route 40.

Distances from Puerto Iguazú, in kilometers: