Here, the road passes through the meseta between the rivers Genoa and Appeleg, following the ancient paths of the Tehuelches.

It is a journey of 180 km in total, 144 are paved and there are 36 unpaved. There are service stations in Alto Río Senguer. Approximately at the half way point, in La Laurita, there is an auxiliary mechanic and a tire shop. 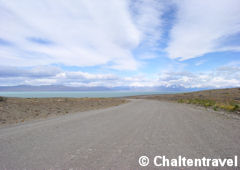 This part of the journey uses provincial routes 20 and 56, which are paved.

Alto Río Senguer has approximately 2000 inhabitants and provides mainly services to the surrounding population, and also, though much less, services to tourists.

From here an interesting excursion can be realized to the Fontana and La Plata (Silver) Lakes. This is an unpaved road which crosses the forests that are the habitat of a small deer called “huemul”. You can partake in free camping along the lakeshores and fish and hunt designated animals. There are also cabins and inns.