Exploring the Valdés Peninsula is a unique experience for the senses. A large tongue of land, profound blue waters on both sides, marine birds in the air and a lone white church, next to the beach and pale as a ghost. Don’t miss this visit. 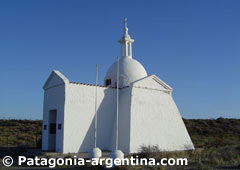 The Florentino Ameghino Research Center and the Regional Museum of the San José Fort, which are located right upon entering the Animal Reserve of Valdés Peninsula, is a well justified stop on your walk.

The San José de la Candelaria Fort is a National Historical Monument, and was a bastion of nationhood in Patagonia besides being one of the first settlements in the region. In the year 1779, Juan de la Piedra established this fort as an advance in the expeditions for the coasts of Patagonia.

In the Museum of the Fort you can view photos of the Peninsula in its most important historical moments: the slaughter of the sea elephants who used to live in Punta Delgada, around the 1800; the first white people who coexisted on the Indians until August 7 th. 1810, when the Indians attacked the settlement and destroyed it completely. There are also photos that illustrate how Puerto Pirámides grew and a sector dedicated to the flora and fauna of the area.

It is strange to see this white, solitary construction, between two oceans (because that is how the two gulfs look like from this perspective). If we let our imagination wander a bit we can picture how it must have been in the days of Juan de la Piedra and his small group  of men who were devoted to settling these shores. It is the same wind, the same sun in the clear sky, the same birdsongs. And you will feel you are indeed in “planet Earth, the way it used to be.” You can also imagine their enormous courage, the passion of these explorers, and how the passing of time resulted in a prosperous and developing present. 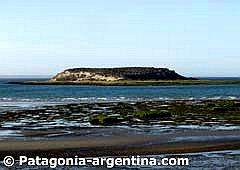 From the balcony of the Center of Interpretation, you can see the Isla de los Pájaros (Birds’ Island) which sits in the San José Gulf, 800 meters from the coast. It is 170 meters long and 75 meters wide. The changing tides mean that twice a day this island is accessible by foot, although the public cannot visit the island in order to protect the species that live there. The number of birds that nest there varies with the season. In  winter you will only observe flocks of flamingos, and during spring and summer there are seagulls, biguás and gaviotines. A shelter has been installed in the coast, it has a huge window, two telescopes and a binocular, so you can see with great detail the birds’ life without altering their habitat.