A gateway to the whales, penguins, the Valdes Peninsula and Welsh traditions. 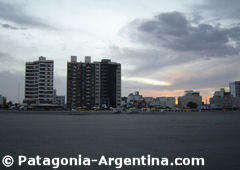 Puerto Madryn amazes the tourist right at the very first sight. It is one of the most vibrant cities in Patagonia, with a beautiful coastal avenue overlooking the huge natural amphitheater of Nuevo Gulf.

Madryn is a port city with a major deep-water port. But it is also an industrial city, mainly focused on aluminum production, fishing and tourism.

It was founded on the 28th. of July of 1865, date of arrival of 150 Welsh immigrants aboard the “Mimosa” that called this natural harbor “Puerto Madryn” after Loves Jones Parry, who was the Baron of Madryn in the country of Wales. 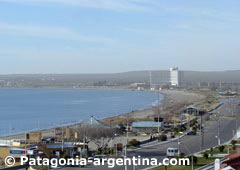 The settlement became effective when Welsh, Italian and Spanish immigrants built the railroad from Madryn to Trelew.

The Railway Station, built in 1889, was recycled maintaining the original structure for the new Bus Terminal.

Punta Cuevas was the place of the first settlement. Ruins still can be observed. 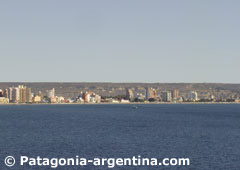 At present, Madryn has a population of 80,000. No doubt that Madryn´s attraction is the fact of being less than 50 km. from the Peninsula de Valdés, a natural sanctuary with a great variety of marine fauna and where whale watching is one of the greatest attractions.