El Calafate, a small town located where the Santa Cruz plateau meets the Andes, is the gateway to the Perito Moreno Glacier. Learn all about what there is to see, know and do, guided by Patagonia-argentina.com’s experts.

The tourist circuit in this region begins at this small town in Southwestern Santa Cruz province, on the south bank of Lake Argentino. Its main activity is Tourism, which keeps growing year after year, due to its neighboring to Perito Moreno Glacier.

Founded in 1927, El Calafate did not grow until the 1940’s, when the National Park was created. 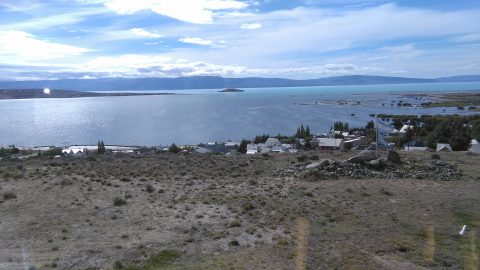 El Calafate has all the facilities needed to satisfy an ever growing tourist influx: there are hotels from 1 to 5 stars, as well as warm and charming “Hosterías” to stay at, lots of restaurants, shops and even an Ice Bar. And during summer there are also campsites available.

The town was named after a typical thorny bush of southern Patagonia. The Calafate blooms in the spring with yellow flowers and in summer with purple fruits. According to tradition those who eat this fruit will always return to Patagonia.

Patagonia Tours
Absolute Argentina
The ideal trip for those willing to know Argentina's travel icons: Perito Moreno Glacier in El Calafate, the End of the World in Ushuaia, the indispensable and mysterious Buenos Aires and the new Wonder of the World, The Iguazú Falls. A combo that lacks nothing, with...
Adventures in Patagonia
A trip designed for active travelers and thrill-seekers! It combines the two most emblematic destinations: El Calafate, the capital of the glaciers, with Ushuaia, the icon of the End of the World. In each place, the selected hotels, the excursions and the services chosen make...
Calafate Gourmet Experience
We propose you a special trip to El Calafate, with two tours that will take you literally to the heart of glaciers: You can walk over the blue ice of Perito Moreno Glacier, visit the famous runways for great sights and also spend a whole...
El Calafate and El Chaltén Express
This is a tour in which you will interact with nature in an active way. In El Calafate, you will see the imposing Perito Moreno from the walkways. The Gourmet Glaciers Experience will grant you the possibility of getting to know the other ice giants...
Deep El Calafate and El Chaltén
It is an ideal six-day trip for those fond of trekking. In El Calafate you will make the famous excursion Hiking Perito Moreno Glacier. In El Chaltén, where the famous Mt. Fitz Roy is, you will have two free full days so as to follow...
El Calafate and Torres del Paine Express
Enjoy this tour through two of the main attractions of the Argentinian and Chilean Patagonia. The majestic Perito Moreno Glacier and a full-day tour through the Torres del Paine National Park.