The receding Viedma Glacier and the loosening of a 415 square km (160 sq mi) iceberg from Antarctica have reactivated worldwide alarm on climate change effects and brought to the table the issue of man’s moral responsibility for this process. Countries’ energetic and industrial needs cause a huge environmental damage, which is becoming increasingly evident in such climate phenomena as floods, tornados, droughts, heat waves, and the spread of infectious diseases.

A Shadow You Soon Will Be 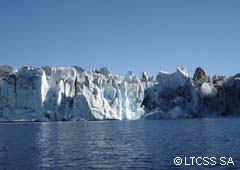 As Osvaldo Soriano’s famous title states, the Earth’s glacier heritage carries in its womb the promise of its own vanishing.Glacier melting serves as a thermometer to measure the effects of global warming. This – as stated by Al Gore in the hypothesis of his film An Inconvenient Truth – is the result of man’s action. The recession of the Viedma Glacier, in the Province of Santa Cruz, is the most immediate example, which renovates the environmental concern.

Unless this trend is reverted, this glacier might disappear in the next few decades, as warned by the environmental organization Greenpeace, based on astudy in which it was determined -through photographic evidence- that the ice mass had lost 50 m (164 ft) of its height and one kilometer (0.6 mi) of depth in relation to 1930. 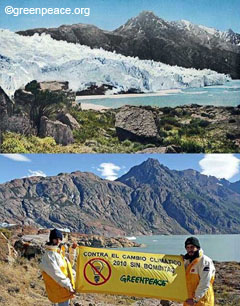 The Viedma Glacier, located 30 km (18.5 mi) away from the Mount Fitz Roy, is a 575 square km (222 sq mi) ice mass belonging to the South Patagonic Continental Ice cap, which covers 350 km (217 mi) along the southern mountain range shared by Argentina and Chile. Thirteen large glaciers and 190 minor ones make up this field; the latter ones are inserious danger of extinction,according to Ricardo Villalba, Directorof the Instituto Argentino deNieves, Glaciares y Ciencias Ambientales de Mendoza (IANIGLIA) and researcher at the Consejo Nacional de Investigaciones Científicas y Técnicas (CONICET). In the scientist’s opinion, “many of the smaller glaciers in Patagonia might disappear in the next 20 or 30 years”.

Villalba, who participated in the Greenpeace expedition in which the Viedma Glacier’s ice mass loss was documented, believes that “in the last 20 years, the glacier extension along Patagonia has been reduced by 10 or 20 per cent”. 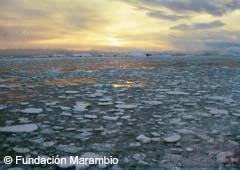 Another event indicating the high speed of ice melting is the loosening of a 415 square km (160 sq ft) iceberg from the Antarctic mass in the western end of the Wilkins ice shelf. The disintegration, which began last February 28, was detected by satellite images taken by the British Antarctic Survey (BAS), an institute that carries out scientific research on the “White Continent”.

According to BAS, six ice layers have already disappeared on the same spot of the continent, but Wilkins’ is the largest one threatened so far. It had remained stable throughout last century, but it began to recede in 1990. Scientists do not believe that it will be able to survive for much longer. According to BAS expert David Vaughan, “the ice cap is now hanging by a thread”. 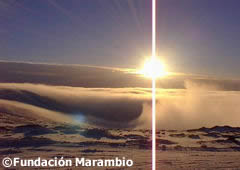 “Melting is faster than expected”, said the scientist, who ascribed the phenomenon to global warming worsening.

In the last 50 years, the region has registered the world’s highest temperature rise, with an average of half a degree by decade.