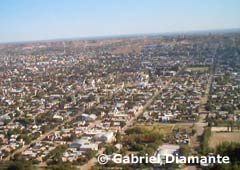 Neuquén, “audaciousness” in the Mapuche tongue, is one of the most vigorous cities in the country and has the highest growth rate in Patagonia. It is located where the Limay and Neuquén rivers join together, where the Río Negro is formed.

Before becoming the provincial capital it was wisely called Confluencia (confluence), and today one of its satellite cities bears this name. Now, Neuquén is a big city. The last census registered about 300,000 inhabitants and is the urban center for the area. In addition to being the provincial capital, it is the commercial and cultural center for the entire region, which also covers Alto Valle of the Río Negro province. 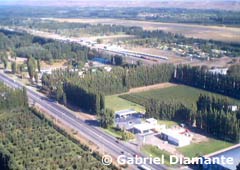 The city lies next to the plateau, where you will find the “high” neighborhoods (in both geographical and class terms) and towards the east it is surrounded by fruit orchards that use low levels of irrigation. Towards the south, a new avenue that circumvents the city was constructed a few years ago, known as the “Multitrocha.” This was built as a response to the large amount of traffic that this part of the route 237 has, which is the link with San Carlos de Bariloche.

The climate is typical of the plateau and places isolated from the moderating action of the sea. The winters are very cold and the summers are very hot. In parts of the hills the winds are very strong, but these places also have natural lookouts that are worth the effort to visit. They have a spectacular view of the orchards that surround the city, and weather permitting, also of the nearby city of Cipolletti, in Río Negro. 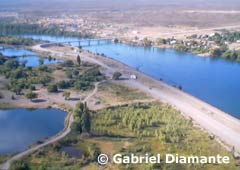 Until 1904 the town of the Confluencia was a commercial center for the wool and leather produced in the region and benefited from the arrival of the railroad in 1901. The layout of the city today still is based around the train station, even though today the trains don’t run and the old station house has been turned into a museum and art-exhibition space. It has been operating as a point of transportation for over 100 years and today it is an important bus terminal, the 3 rd most important in the country.

Before Neuquén became the provincial capital, Chos Malal was the capital, which lies more to the northwest and has strong commercial links with Chile.

The city experienced a large growth spurt in the 70´s due to the drilling of the region’s oil reserves, tourism, horticulture, and the provincial government’s plan in bringing more people to the city. This growth has turned the city into the definitive financial, commercial and cultural center of Northern Patagonia.

Sightseeing in the City 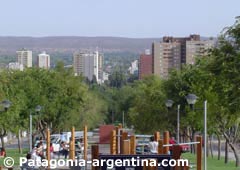 A very pretty walk to take is along Avenida Argentina in its entirety, until reaching Centennial Park (Parque del Centenario), where there is a plaza of the flags, which serve as a tribute to the regiments that fought in the Desert Campaign (which conquered Patagonia from the indigenous population). Off to the side of this plaza you will find the lookout “Balcony of the Valley.” From this point you can see the entire city, and weather permitting, you can also see the confluence of the Limay and Neuquén rivers, and the birth of the Río Negro. At night you can also see the lights of Cinco Saltos and Centenario. 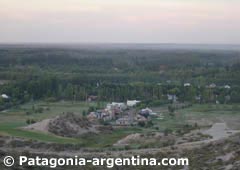 At the foot of this lookout, at the beginning of Avenida Argentina, you will find the seat of the National University of Comahue, the most important in Patagonia, which has various campuses in the provinces of Neuquen and Río Negro.

You can also visit the Government House of the province, built to look like the replica of a fort, at the intersection of the streets Rioja and Belgrano.

Very close to this point, on the street Roca, you will find the site of the fair of the provincial artisans. You can buy textiles, ceramics, leather, wood and silver goods from all over the province.

Another pretty spot, right in the center of town, is the Central Park (Parque Central) where you will find the Doctor Gregorio Álvarez Municipal History Museum, an old building that was once the machinery hanger of the Southern Railroad. 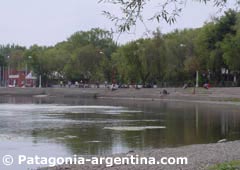 This antique station is also the home to the Artisan´s Fair, which cannot be missed.

In the summer, swimming in the Limay river is a refreshing option.

There are many bus companies that link Neuquén with the rest of the country. There are also daily flights to Buenos Aires, Bariloche and Mendoza.

There are two main options if you leave from Buenos Aires by car:

If you are going to drive to Neuquén you should read these interesting advices about driving across Patagonia.

What to see around Neuquén City?