Northern Neuquén: A territory to explore

” You will feel the magic of being the first one to arrive ” says one of the tourism brochures, and it is the truth. This applies to many places in Patagonia, but it is particularly appropriate for Northern Neuquén. 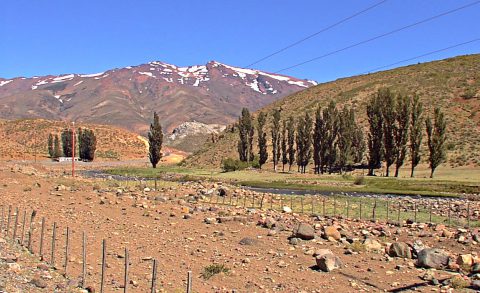 To say that it is a unique land, unrepeatable, different and original is not enough. One says that it should be said that it is “more unique” or “more different.” The sky above Andacollo, the colors of the mountains, the imposing Mountain Chain of the Wind ( Cordillera del Viento ), the emotion of following a river to its place of birth. . . like the Nahueve in the Lakes of Epulafquen . . . And the silence that is always present. But it is a silence full of secrets, because of the streams that wander between rocks, the shepherds traveling with their herd, the wind. . . And the people, the wonderful people of the north, friendly, helpful, knowledgeable of the places and their legends, always ready to receive visitors.

Speaking of silences, secrets and music, one of the first things that a visitor notices is the strange sound of the names of the towns, rivers and mountains. This is because they are in Mapuche and Pehuenches, the first inhabitants of these places, and their presence lives on through the place names: Andacollo, “Shining upon high”; Huinganco “Stream where there is huingan (a plant); Varvarco, “Bitter Water Valley”, Nahueve “Place where there are tigers”; Atreuco, “Cold Water”, Buraleo, “Whitewater”; Domuyo, “That which trembles and erupts”; Moncol “Round Peak”; Pichachén “fallen tree”; Trocomán, “Condor Nest”. . . And we can continue with a longer list of fascinating names of Northern Neuquén. . .

Northern Neuquén is a land of history, mysteries, and legends.

History tells us that Chos Malal, the main town, was the first capital of the territory. Between its mountains important battles took place during the Campaign to Conquer the Desert, and there is a tightly woven history with Chile, which is very nearby.

There is mystery surrounding the footprints left behind by unknown civilizations in the rock carvings of Colo Michi Có and El Chacal. And there are more questions that remain unanswered: How do the multicolored algae survive in the boiling waters of the Domuyo volcano? Why does black smoke emerge from the cave where the stream Butalón is born? 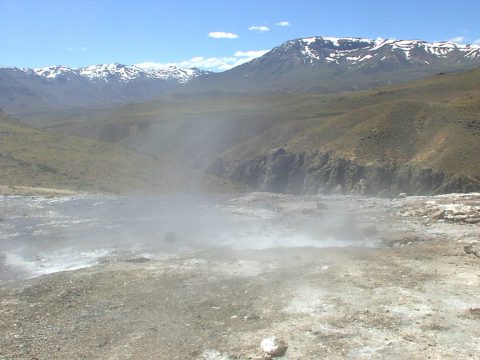 Here we will tell one of the most beautiful tales of the North to give you a taste of the legends you will encounter. The story is called: The door of the lake.

“When the Inca Atahualpa was taken prisoner in the citadel of Cuzco, the Spanish set a ransom which was that the room in which he was being held prisoner in had to be filled to the roof with gold. Officials traveled around the kingdom with the order to collect enough gold to liberate the Son of the Sun. From the region Milla Michi Có (“Gold under water”) they prepared a huge caravan of llamas carrying gold when they found out that the king had been killed.

The order was changed to hide the gold. The chief of the expedition knew that in the Mountain Chain of the Wind there was a lake in which the steam of Huingan Có was born, and deep in the mountains that surrounded it there was big cave, semi-covered in snow. They carried the gold to this secret place. After the gold was deposited they closed the entrance with perfectly carved stones. Before placing the last stone, the Indians enclosed themselves in the cave in order to be the internal guardians of the gold. Only one was left outside, who was in charge of placing the last stone and returning to Peru with the news.” 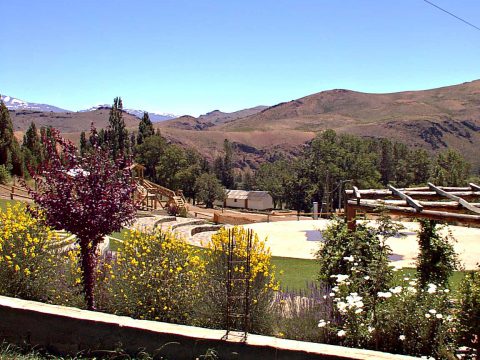 They say that those who have seen the bottom of the Huingan Có lake after winters with little snow and hot springtimes have observed, at the foot of the mountains, the mysterious image of a door. The few who have visited this place have encountered perfectly carved blocks of stone which a blade of a knife cannot enter in between.

Here rests the treasure of Atahualpa, guarded by its Inca servants.

There are journeys that change the way we look at things and that touch the inner fiber of our being. A trip to Northern Neuquén is one of them: it changes your soul.