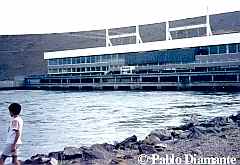 Traditionally it is known as the place from which to observe one of the greatest engineering works of modern Argentina: the dam and the great lake of the El Chocón-Cerros Colorados complex. But this picturesque village discovered, soon after being founded, another wealth that comes from the past: the great paleontological site that sleeps under its soil, land of dinosaurs and ancient jungle made today stone and plateau. Discover through this article this fascinating area.

The Villa was founded on the shores of Lake Ramos Mexía, of the El Chocón-Cerros Colorados dam. It was in the ’70s, in full boom of energy development in the country, and its construction was in charge of the company Hidronor, which also built the dam.

Its inhabitants do not add more than 1500, mostly workers of the company.

It has a modern urban design, it is built in a stepped way towards the lake, with neighborhoods of residential housing, quiet inner streets, squares and gardens. There are post offices, a bank, a supermarket and various shops. One has the impression of being in a true oasis in the middle of the plateau.

There are no hotels but there is an organized camping site and adequate facilities for fishing, swimming, sailing and enjoying a wonderful day.

It is interesting to visit the Church, where there are symbols alluding to the water and the dam. The image kept inside is unique, since it is Our Lady of El Chocón, Patroness of the Argentine Reservoirs. It is surrounded by a set of twenty flags corresponding to the various countries where the men who worked on the work of El Chocón originated from.

In front of the Church is the Municipal Museum, which has become today  the real pearl of El Chocón, in addition to the lavish engineering work that is the dam. It exposes the paleontological material found in the area, an incredible reservoir of fossils of dinosaurs, both mammals and birds, which have left even their gigantic prints imprinted on the stone of the shore of the lake. Not a casual fact then that it is known as the Valley of the Dinosaurs.

Most of the fossils belong to the Lower Cretaceous, with an age of 105 million years. 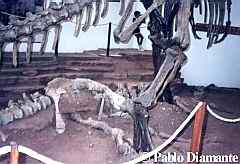 The first findings were produced by researchers from the Universidad Nacional del Comahue. But in 1993 it was a villager who claimed to have found a dinosaur fragment. The staff of the museum made the verification and it was discovered that it was a specimen of carnivorous dinosaur (theropod), similar to the Tyrannosaurus rex but with a much larger size. It was called Giganotosaurus carolini, in honor of the inhabitant who discovered it, and is considered the largest carnivorous dinosaur of all time.

Researchers have constructed a replica of the bones found and, from this, they have made a model in real size that is exposed, erect, in one of the rooms of the Municipal Museum.

The museum has seven rooms, where fossils of plants, a replica of an excavation, fossils of aquatic animals, a microcinema, and also two rooms where you can see the model and all the works of the dam. The access fee is very affordable.