The Penguin Interpretation Center of Punta Tombo, nestled in the  wildlife reserve, was built without altering either nature or landscape.


To get to Punta Tombo, the largest continental reserve of Magellanic penguins it is necessary to travel about 120 km. from Trelew or 170 from Puerto Madryn. 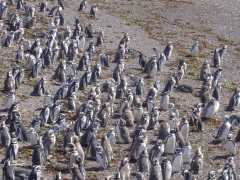 Every year it is visited by thousands of tourists who arrive to get to know the beautiful marine environment and share for a few hours the elegant walks of the penguins.

In pursuit of the least possible aggression to the environment, this center has not altered the nature of the reservation. Virtually not seen from the access, and at the same time allows a privileged view of the entire environment. 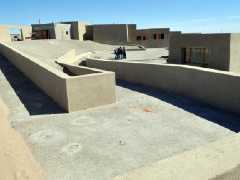 The water used in the facilities is gathered through a cistern, located in the courtyard of the Interpretation Center, called “Patio del Aljibe” and then passes to other reservoirs. The wastewater is collected in a sewage system by filtration that does not go to the sea.

The energy is solar. The Interpretation Center of Punta Tombo has no lamps and is illuminated by the sun. The building lights up naturally, although there is also an emergency energy system of 220 V.

On the other hand, the materials used for the construction of the building, among them adobe, the traditional brick and other organic materials practically do not cause damage in the natural environment.

The Interpretation Center has three main areas:
1) A first service area in which there is the parking lot,and the access booth. 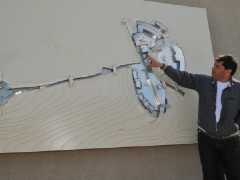 2) A central area where the confectionery is, with imposing windows allow a panoramic view of Janssen Bay, where Punta Tombo is located. Here are also the sanitary facilities for ladies and gentlemen, the hall of the Magellanic penguin, the gallery of the sea and the land, the conservation gallery, the laboratory, the office for scientists and the administration. There is also the imposing terrace, the patio of the Patagonian cistern and the Alto Domo de los Vientos.

3) A service area not intended for the general public, which includes a housing for scientists, the housing of the ranger, tanks and machinery rooms and reserve tank sector.

The rooms in detail 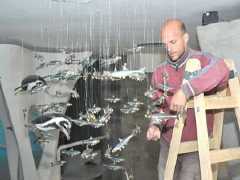 The first room that is accessed is called “Territory Room”. In it there is a Punta Tombo model and the story of this reserve is told.

Then you access the “Penguin Room”, where a sculpture of a penguin built in marble Carrara, 1.70 meters high surprises. There are drawings of the evolutionary cycle of the penguin, where the life of these animals is described, from the moment the egg is formed until it dies along with its migratory process. The other three rooms are “Sea Room”, “Earth Room” and “Conservation Room”.

This space is connected to the Earth Room which has a small room equipped with lcd displays that show the fauna of the place through television cameras installed in Punta Tombo. So visitors can see what happens under the sea. In this room there are also pumas, guanacos, maras and birds.

The last one is the “Conservation Room” where there is a sort of museum and library. To exit you have to go through a velvet curtain called “caressing”. Its objective: that the visitor leave this place with the effect of a caress: the caresses left by the sea and the land.

And in the end, the inevitable Patagonian wind 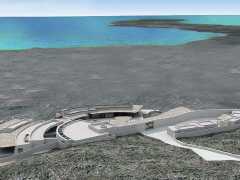 At the highest point of Punta Tombo, a hill located 51 meters above sea level, the “Domo de los vientos” was built, a place that pays homage to the Patagonian wind. It was built in this place because it is where the most powerful wind of the Patagonian wind has been recorded in Punta Tombo: 180 kilometers per hour. Its shape resembles that of a gigantic corridor, with cement seats and at the end, a rose of the winds. From this sector you can observe the landscape in 360º.