Due to their slow motion, and the fact that they float when they die, these cetaceans have suffered the worst pressure during the commercial exploitation that took place between the 17 th and the 20 th centuries. 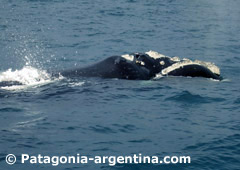 The International Convention for the Regulation of Whaling, signed in 1935, gave them total protection. Since then, a slow recovering of the species has taken place. In order to follow this protective attitude, Argentina declared the Southern Whale Natural Monument in 1984.

Its head takes up a third of the whole body. It has a large curved mouth, 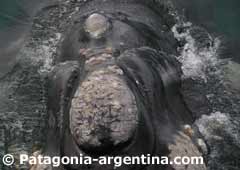 with 260 horn-like sheets 2,6 m high that hang from the upper jaw, also known as baleens. Water is filtered through them, retaining microorganisms that serve as food.

On the back and the sides of the head, the whale has callosities, namely thickened parts of the skin, on which whitish crustaceans, known as “whale lice”, settle. The fact that such callosities have unique sizes and shapes on each whale, they serve as their identification marks for those who study them.

Every year, during winter and spring,what may be considered as the biggest group of southern whales arrives at the shores of the Gulfs Nuevo and San José, in Valdés peninsula. 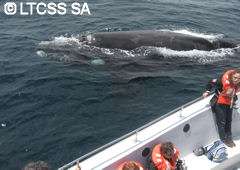 They come in search of quiet and “fordable” waters, so as to mate and give birth. In November, they leave the breeding area, swimming in to look for krill, their major source of food.