Located on the northeast of Santa Cruz province and to the south of the wide entrance of the Gulf of San Jorge, it is mainly characterized by its location on the north coast of the mouth of Ría Deseado, a drowned valley or drowned river valley which, in the shape of a long and narrow funnel, makes its way into the Atlantic Ocean.

From there, a combination of winding hills and cliffs stretches to the north and more regular slopes extend to the south, which has been highly beneficial for the settlement of the most important port in Patagonia. It has favored livestock and fish loading and unloading and it also represents the starting point of 90% of exports.

A bit of History

The coast of Deseado was first discovered in 1520 by the expedition of Ferdinand Magellan. On December 16, 1586, the ship commanded by Thomas Cavendish, known as “Desire”, sailed along the ria and gave 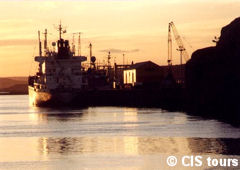 the place its present name. In 1790, by order of the King of Spain, the Real Compañía Marítima (Maritime Royal Company) arrived. They settled a factory and a fort that led the development of maritime commerce until 1807, when they were abandoned due to the English invasions.

In 1834, Charles Darwin explored the ria down its final stretch, and in 1876 Francisco Pascasio Moreno repeated the same journey. In 1881, a delegation of Prefectura Naval Argentina (Argentine Maritime Authority), Subdelegación Marítima de Puerto Deseado, settled in the 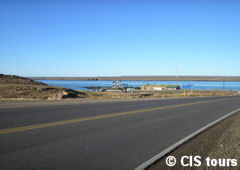 southern margin of the ria. Eventually, on July 15, 1884, Captain Oneto disembarked with a group of settlers to join the colony recently created by the National Government, thus originating the current city of Puerto Deseado.

Today the city has some 13,000 inhabitants and the main economic activities are fishing and the growing tourism industry.

Deseado offers a complete infrastructure and basic services. There are restaurants, supermarkets, top level hotels and campsites with a wide range of amenities. The main attraction for tourists from all around the world is the native marine fauna.

Activities and places of interest

– Provincial Museum “Mario Brozoski”: Located between Colón and Belgrano streets, it is one of the recommended places to visit. There you can find the remains of the Swift Sloop, sunk around 1700 and recovered from Puerto Deseado waters in 1985.

– Ferdinand Magellan Monument: Located on Paseo de los Grandes Navegantes street, which surrounds Punta Cascajo premises, it is one of the city symbols.

– Former National Patagonian Railway Station: This Railway Station was built with stones from the region and it has a medieval style influence. It is a City Historical Monument and was declared of National Tourist Interest. 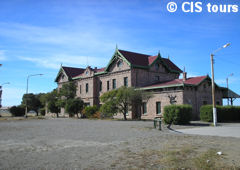 was used for the Puerto Deseado – Las Heras line between 1909 and 1978. It was a key element for the military operations performed during the rural strikes of 1920 and 1921. It was sold at auction in 1980, but recovered thanks to a popular mobilization. Today it is a Provincial Historical Monument and it hosts the Office of Tourism.

– Cañadón Filgueira Viewpoint:  Located on the north of the city, this natural promontory is a panoramic viewpoint facing Puerto Deseado, the ria and the sea.

– La Pesquera Viewpoint: It is another option to enjoy a panoramic view of the region.

Among the main events and festivities, we can highlight the annual peregrination to the Virgin of Lourdes, which is one of the most transcendental events for the inhabitants of Deseado and is carried out during the first fortnight of February.  The sanctuary is about 15 km. (9 mi) from the city. Puerto Deseado is also the permanent venue for the National Shark Fishing Contest “Pesca del Tiburón”, open for visitors in January.

From humid/dry in summer to humid in winter, the weather is between warm and moderate cold. Maximum mean temperature is 21.7ºC  ( 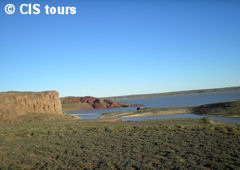 71ºF) and the minimum mean temperature is -0.2ºC, (28.5ºF), but the typical characteristic of these lands are the strong winds, due to its coastal location. For this reason, whenever you visit Puerto Deseado, you should bring windbreaker jackets at any time of the year. You should take into account that in winter fogs are common, so you may find it difficult to appreciate landscapes for about 18 days in the year.

In the ria of Puerto Deseado there coexist five species of cormorants, of which only three nest in the region. Between October 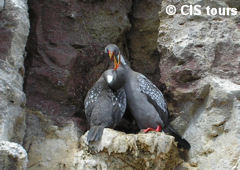 and April, the Magellan penguin is a common inhabitant, and the main penguin colonies are located in the islands Quiroga, Punta del Paso, de los Pájaros and Chaffers.
A transitory colony of sea wolves lives in the Wolves Rock, which receives its name after its sea-wolf shape.
You may also find three species of oystercatchers, and the predominant is the Blackish with orange bill.
Among dolphins, the Commerson’s is the most common. 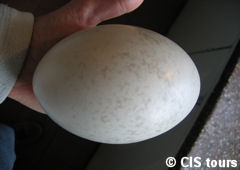 All along the vast land, you can also appreciate swans, terns, gulls, skuas, oystercatchers, plovers, grebes, petrels, flamingos, sheathbills, herons and egrets, among many others species.

The scarce vegetation, mainly small bushes, is the result of few rains.  In the city of Puerto Deseado you may find hundreds of trees, mainly small and robust elms with thick foliage.

By plane:
There are domestic flights arriving in Comodoro Rivadavia, from where you should take national routes  3 and  281 – paved – and drive 285 Km. (177 mi) to the south.

Distances from Puerto Deseado to:

What to see around Puerto Deseado?