The Expert in Salvage and Diving Operations Carlos Massey, a specialist in refloating who has worked for the Argentine Naval Prefecture, seems to validate what Chironi claims to have seen: “One day, by the end of August, I was called to a meeting at the naval base (…) and when I got there I learned that I had to evaluate, along with other experts, the possibility to salvage two German submarines sunk at the end of the war. The Navy had accurate details about their location, because a Neptune plane had flown over them some seven years before. They were about 15m deep and some eight hundred meters off the coast, almost parallel to each other and slightly more apart by the sterns. In the photographs we were shown we could distinguish the silhouettes of the vessels and even the sails, which appeared darker in color.” 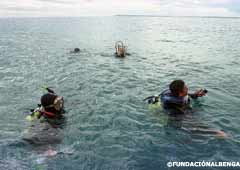 Some years later, a resident of the area named Vidal Pereyra reported: “In March, 1980, some friends of mine came over and said: ‘There’s a Northern wind, let’s go see the submarine.’ When we arrived at the beach we could see the prow very clearly; it was aground some 200 meters off the coast. Afterwards I never saw it again, but a lot of people from around here know the story, and I even think there’re photographs.”

And yes, there are photographs. Or at least one, according to the amateur photographer Eduardo Frías: “It was an extraordinary low tide day and I rented a light aircraft to see if I could find them. The person who had told me about the submarines and where they were was Carlos Taborda, President of the Provincial Board of Education. We were flying over the area and suddenly we spotted them. I took pictures of them, we carried on towards San Antonio, turned around, and when we came back the tide was already high, the light had changed and we didn’t see them anymore.”

Whether it is one or two the submarines lying at the bottom of the sea –or, according to the most skeptical ones, none- the truth is that they continue to stir up doubts and pursuits. 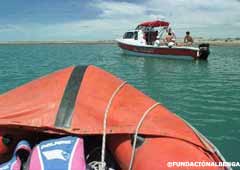 So much so that in November, 1996, one of the most spectacular expeditions was carried out in Caleta de los Loros. A team led by Luis Artigas Brochado, from the San Antonio Oeste Institute of Marine Biology, conducted the inquiry with the collaboration of pilot Mario Chironi.

The results of this inquiry were unsuccessful. Brochado later claimed in several interviews with the media that there is nothing out there.

However, rumors continue to circulate and have even inspired the making of a documentary. Production Company Cuatro Cabezas embarked on board the ship “Ice Lady Patagónico” in 2003 to film the search for the renowned submarines.

Whether to believe it or not, beyond any evidence and rumors –or the complete lack thereof- always depends on oneself…

*Note: The statements referred to here have been extracted from an article published in La Nación newspaper.