These rumors seemed to concentrate on a specific spot. A desolate place with lonely beaches that appears to be in the middle of nowhere. In the province of Río Negro, more specifically in San Matías Gulf, 140 km. (87 mi) from Viedma and 100 km (62 mi) from Las Grutas, such place is called Caleta de los Loros.

In the time-lapse between the first surrender, that of the U-530, and the second, that of the U-977, many people claimed to have seen unknown submarines in the area. Some of those claims are extracts from documents of the Argentine Navy. Two of those documents, dated the same day, state:
“From the Naval Squadron. July 18th, 1945. 19.15. C.4063. GR20. Relaying signal from Mendoza stating EGA periscope San Antonio Este. Intend reinforce search there.”
“From Escumar to Escumar ships. Received 23.00 hrs, July 18th. Hydrophone pursuit informs submarine bomb charged until nightfall. Nothing to report. Position: near El Fuerte.” 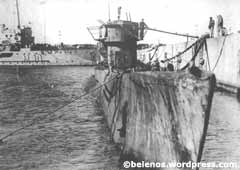 As regards unofficial versions, one of the first ones seems to be pilot Mario Chironi’s: “In 1957, while I was flying over the area of Caleta de los Loros, I spotted something there, sunken, barely emerging from the water. I thought it was a ship. Later, they began to talk about a German submarine. (…) I remember the tide was low and I saw a partially sunken ship, whose prow was a little above the waterline, at the mouth of the canal.”