A group of German researchers has closely studied the evolution of a very important colony of burrowing parrots at the El Cóndor beach, near Viedma, and discovered that its number is dramatically decreasing.

One of the reasons is that local authorities do little or nothing to prevent cars from parking right on the beach. We sometimes do not pay attention to the damage this causes but must react before this particular species goes extinct. 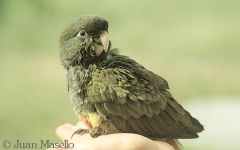 The colony of burrowing parrots (Cyanoliseus patagonus) of El Condor is the most important breeding site of this species in the world, and the status of the species is declining. Considering the risks to the colony by increased human impact in the form of the presence of vehicles, parking sites, buildings and coastal defense infrastructure, we would ask you kindly to take all possible measures in order to protect this important site.

The burrowing parrot (Cyanoliseus patagonus) is one of the most southern neotropical parrots. In Argentina, it occurs from the Andean slopes in the Northwest to the Patagonian steppes in the south. This species generally inhabits open grassy country but is also reported from wooded valleys with cliffs and farmland to about 2,000m. The race Cyanoliseus patagonus occurs in Central to Southeast Argentina, ranging occasionally into Uruguay in winter. Burrowing parrots breed colonially excavating their own nest burrows by tunnelling into the faces of sandstone, limestone or earth cliffs.

Until the 1920s the species was very common, but it is now only patchily abundant. The species’ decline is due to increasing persecution as a crop pest, conversion of grassland to arable crop production, and trapping for the live bird trade. The largest colony and most important breeding site of this species is on a sandstone cliff 3 km west of a village called El Cóndor in the province of Río Negro, Argentina. It is 5 km long and in the first kilometre there are 6700 active nests. It is in this colony that, over the last two breeding seasons, we have studied the breeding biology of this threatened parrot species.

In the first kilometre of the burrowing parrot colony, the sector with the highest density of active nests, there is an access to the beach for cars and other vehicles. This seriously affects the birds firstly because many nests are destroyed (and chicks killed), and secondly, the presence of vehicles on the beach frightens the adults who will not feed the chicks when there are vehicles close by.

There are many other regional threats to the parrots including burning of fields neighbouring the colony, hunting the birds for sport and the pet trade, and poisoning seeds and crops to kill the parrots. Please, help us to protect this spectacular species!

There is a very interesting article from the World Land Trust (an international conservation charity) for you to read as well if you are interested in this beautiful species.