Patagonia has got a rich and characteristic wildlife 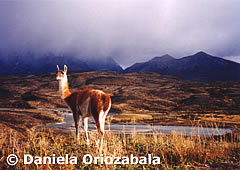 There are many animals and a noticeable diversity of species. Among the great vertebrates is the Southern Right Whale, which can be watched from the shore, and also Orcas, dolphins and the great amphibious mammals such as sea-wolves, sea elephants and seals.

Birds deserve a special comment. If we had just to mention those species in Isla de los Pájaros (Island of the Birds), across from Península de Valdés, we would need many pages. We would mention only the most important ones, among them Magellan penguins, some species of cormorants, seagulls and Antarctic doves.

Going away from the coast and getting into the continent, we learn that the ancient inhabitants, native animals of the tablelands, have been displaced by species which were introduced by man at the times of the conquest and colonization.

The original fauna consisted of the tiger, the aguará-guazú or “big fox”, the pampas deer and the peccary, having them all moved north nowadays. The new inhabitants are red deer and wild boars, along with the sheep and goats livestock. But pumas and guanacos have stayed indeed, being forced to compete with sheep and goats for the land.

The most characteristic land animals that can be watched easily, though decreasing in number when going south, are fox, wild cats and skunks, Patagonia hare or mara (protected endangered species), armadillos, Patagonia ostrich and martinetas (species similar to partridges but a bit larger).

In the area of the mountain range, huemul or regular deer, and pudú or dwarf deer, native and unique species, are almost extinguished today. There are also red deers, which are not from the region. In the Andean rivers there are also plenty of imported species such as trout, rainbow trout and salmon.

The birds of the continental part, in the area of tablelands, are mostly predatory and carrion ones. Many are seen along the roads since they eat the remains of the hares and other animals the cars hit. Also on the tableland, especially near the coast, there are parrots and avutardas. Condors can be seen only in the high parts of Andes.

Poisonous species are not common and there are some quite rare, such as a snake that lives in the northeast area, “escolopendra grande”, and a spider, “viudita” (little widow) or red-butt spider, black bean-shaped and a red spot in the back. Its sting can be fatal. It’s not the same thing about scorpions, much more common and their sting can only produce an itch. A bit scary but totally inoffensive is the “chicken spider”, do not be afraid of it.