Man is active, and the consequences of his actions are sometimes constructive and sometimes devastating. Acting in favor of the conservation of areas rich in biodiversity is a significant step to repair damage, and also to preserve our natural heritage 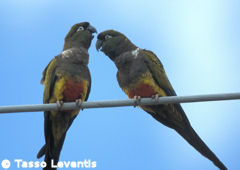 Many inhabitants and visitors in the Río Negro northeast region have noticed an overpopulation of Burrowing Parrots in the city. Some have even said they are a plague. However, the Doctor in Natural Sciences and well-known Argentine Biologist Juan Masello explains this curious situation as a sign of weakness –rather than strength- of the parrot colony. “What happens is that this winter was very hard for them. They didn’t have enough food; so many individuals could not reach an adequate physical condition to reproduce. This is the reason why they are in town and not in their nesting area”, said Mr. Masello in an interview for Noticias Net.

El Cóndor natural reserve in Rio Negro, located near El Cóndorbeach, is the only unprotected area in this territory, and it is currently affected by a series of threats such as forest clearing and garbage dumps. Additionally, there is an intense real-estate pressure 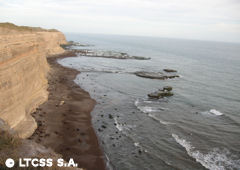 that results in a growing number of lots for sale, with the consequent natural habitat break up and the resulting unplanned urbanization.

This is the richest bird reserve of the Patagonian northeast region, although 9 out of the 164 species that inhabit this region are globally threatened (Rhea, Magellan Penguin, Black-browed Albatross, Southern Giant Petrel, Chilean Flamingo, Ruddy-headed Sheldgoose, Olrog’s Gull, Yellow Cardinal, and Pampas Meadowlark). Moreover, this reserve, extending along 12 kilometers (7.5 mi) of cliffs, is home to a nesting mixed colony of Burrowing Parrots, swallows, and various birds of prey, which play 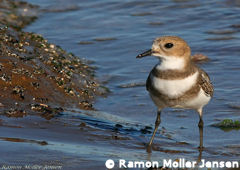 essential roles for maintaining the ecosystem.

Together with other researchers and the support of entities such as Fundación Patagonia Natural (Natural Patagonia Foundation), Fundación Aves Argentinas (Argentine Birds Foundation) and WCS, Wildlife Conservation Society (a bird-protection organization in New York), Mr. Masello has had the initiative of proposing a bill explaining the advantages of declaring El Condor Reserve a protected area to be recognized as one of the Important Bird Areas (IBAs), which are also promoted by BirdLife International.

Apparently, making the reserve a tourist point for birdwatching is the only way to protect the area and draw the attention of legislators. 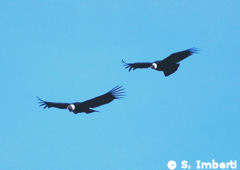 This is not as bad as it seems, because El Cóndor can make a considerable contribution to the development of tourism in the region.

In times of natural disasters and campaigns aimed at undoing the effects of man-made catastrophes, it is time to repair and push to give birth to a new citizen conscience, or rather, a new human conscience. Although thousands of kilometers away from Katrina hurricane or Indonesian tidal waves, our lands’ inhabitants (people and animals) are not safe from suffering the effects of a global threat. In order to deal with this situation, it is essential to build a global conscience.  And a fundamental element of this global conscience is the environmental conscience.