From the pinniped (sea mammals with fins and feet), the sea lions are the only ones who also have ears. 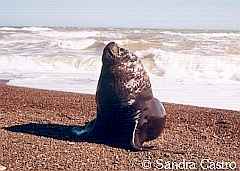 The aspect of this species varies a lot according to age and sex. Adult males have very long necks covered with a thick pelage compared to the one over the rest of the body. Their snout is short and raised, with long moustaches.

This animal’s total length can be 11 feet, while the female does not surpass 8 feet, with thin, elegant shapes (its neck is not as thick as the male’s) and also doesn’t have a mane.

At birth the puppies are hardly longer than 1,5 feet and are covered by a short and shiny hair, almost black.

The Sea Lions spend most of their time in the sea. They are very skilled and when they leave the water they seek rocks or isolated islands. They walk with their bodies raised and supported by the four limbs, with clumsy but quite fast movements.

They exclusively eat fish, devouring between 15 and 25 Kg. a day. 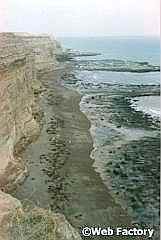 At the beginning of spring they start to gather at the colonies; The males arrive first and spend most of the day in the land; soon after the females about to give birth arrive. During a period which extends for some 5 weeks, these animals do not get into the water so, they do not eat. The males start forming their harems, fighting to see who is the one that gets the biggest number of females. It is a hectic period during which the Orcas come close in order to obtain their precious food: the baby sea lions…

At the Centro de Interpretación de Punta Bermeja (Fauna Interpretation Center of Punta Bermeja) besides being able to watch them from a magnificent lookout point on a catwalk, you will be able to obtain further information about these lovely animals and see excellent photos illustrating the whole of their life cycle.