This is one of the many little virgin places that can be found in the northern shore of Patagonia. It once became the center of a limit dispute between the provinces of Chubut and Río Negro. In this article you will find its history and all the necessary data to get to it and to arrive there. 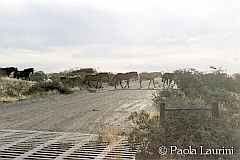 Puerto Lobos does not have a hidden gold mine nor petroleum under its lands nor oysters with pearls behind the waves. It does have a wonderful beauty and a history that deserves to be told.

During the 30’s Puerto Lobos had little population: a Peace Court, a police station, a school, a groceries store and a few people… a group of houses on the side of the long straight route no. 3, on the parallel 42, a fact that meant at those times that from there on, the tax-free area began. It had its importance.

Years went by and progress indicated that route 3 would be paved but that it would be transferred 22 kilometers to the west. Puerto Lobos was left there, too far to survive. The little town disappeared.

What did not disappear were the beaches, nor the waters filled with fish, nor the rocks with octopuses and mussels, nor the guanacos and the rheas with their chicks, the famous Patagonian hare and the martinetas (species similar to partridges but a bit larger) from the surrounding lands.

Puerto Lobos is located in km 1113, 56km to the south of Sierra Grande and 88 kilometers from Puerto Madryn. You will have to take route no. 3 and then take a 20 kilometer detour until reaching the coast through an unpaved road. 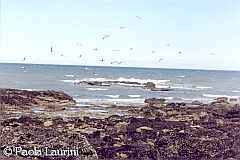 Once you have arrived, you will see a large beach filled with small stones, where the sea becomes deep only a few steps from the coast. The ruins of the old hotel are here as well as the rest of the buildings that belonged to the old Puerto Lobos.

When the low tide is large, only a few days during the year, there are rocks with mussels, scallops, cholga mussel and small octopus at hand’s reach.

If we face the sea, there is a stream on our left, a small entrance to the sea that constitutes a very good fishing spot: silverside and whiting to be fished with nets.

When you cross the stream, heading to the north, the landscape changes and you reach a large sandy beach known as “Puesto Blanco” by the local people. Here also, during low tide (but this time a regular one, you do not have to wait for rare moons) you will discover rocks from which you can collect in the beach in Lobos, mussels, cholga mussels and small octopus. There is a special pool, a very large one, where you can fish groupers. You have to be very careful when you go to that rocky area and you have to keep count of the time so as not to get caught when the tide changes.

So as to be near the beach, the only option is the camping site in the wild. There are no services available so you have to take everything you may need for your stay, do not forget water. 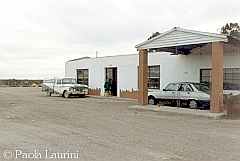 If you do not wish to camp, there is a small hotel in the crossroads of route no. 3 with the detour that leads to the beach. It is called “El Empalme”. It is a traditional Patagonian accommodation, with not many rooms, it is clean, modest but the services are very good.
The owners are local people who know countless histories and all the secrets from said place, they cook homemade food and they organize salmon and shark fishing excursions.

They have a dining room where they serve homemade meals at very reasonable prices. The noodles and the roasted lamb are a must, accompanied with Elsa’s kneaded bread.

As we first said, in Puerto Lobos there is not much but it has everything: all the sun, all the beach, all the fishes, all the time… If this summer you tour the coast of Northern Patagonia, do not hesitate to pass by. Nature awaits you.

We thank Paola Laurini’s collaboration with the history, the facts and the photos.