The four elements of life are vital to understand the Mapuche viewpoint. The air symbolizes the force that pushes existence, although there are good winds and bad ones. Here you will find a particular character of their mythology.

Meulén in Mapuche language means “whirlwind”, and in their mythology he is taken as an embodiment of the whirlwind with a mischievous spirit. 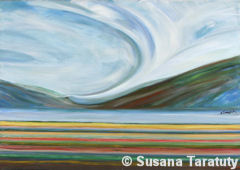 path. He is thought to be related to evil forces and to bring misfortune and illness. Others, on the contrary, think he is good and that his pranks are part of his nature. Blowing dust, branches and leaves, stirring up river waters and lakes, he moves on his wandering way without premeditated victims, grumbling or roaring with laughter at the consequences of his jokes. This guffaw is what we know as the sound of the wind.

He dwells at the top of the mountains and this myth has probably influenced in the name of one of the Andean ranges, to the North of 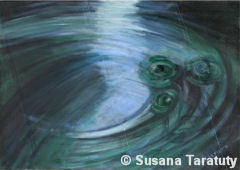 The air gives life to the human soul and to the sacred, so it can be understood as a positive or negative entity, depending on how its force is used. “It is the spirit that lives in emblems, in the machi’s songs, in the predictions of the wind and inside every human being. There lies his relationship with life and fertility”1 .

A poem by the Mapuche writer Elicura Chihailaf pictures him in the following way:

Among clouds of dust 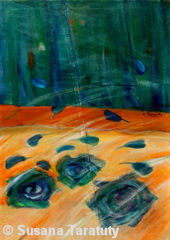 Meulén came down the valleys
whispering between the rocks
They say
that at dawn
flying
Meulén crossed the airs
Asleep among the stems
I was listening to his whispering
The night went through softly
among the hills
Fast,
a bird of dust
numbed my head
with its flight.