An Argentine foundation is studying the relationship between the rocky plateau known as the Fort and the Knight Templars’ alleged adventures in the American continent with the secret mission of protecting the Holy Grail. A believe-it-or-not story. 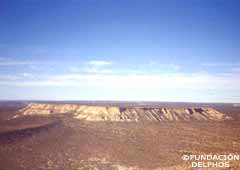 At 41º South latitude and 65º West longitude, in the Province of Río Negro, within San Matías Gulf, around 15 km from San Antonio Oeste and near Las Grutas beach resort, there lies the Argentine Fort, as we call it nowadays. I say “nowadays” because in the past it was known as the Abandoned Fort. The question is, in the past, it may have been one of the Cities of Caesars built by the Templars to safeguard their most precious treasure… 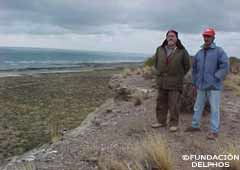 The Fort is a rock formation that possesses very special characteristics —it is a great coastal plateau that reaches 153 meters above sea level. From a distance, the Fort greatly resembles an island.

And it might as well have been one thousand years ago, when the sea was supposed
to have been 20 meters higher and the Negro River was supposed to have had a second mouth just south of the Fort.

Delphos Foundation, a multidisciplinary team that studies these matters, supports this by producing maps and ancient documents.

But this is only a complement to the Foundation’s central hypothesis. This apparently desolate place hides a great secret:It is an abandoned city of the Templars that in its golden age kept one of the greatest mysteries of Christianity… The Holy Grail.

Delphos researchers say that according to many historians the Templars frequently traveled to America in pre-Columbian times, so it shouldn’t be surprising that “cities of Caesars” were established in the continent.

The Foundation states that three cities were established in the present Patagonian region: one on the Pacific near Osorno city, another in the lower slopes of the Andes, and the third on the Atlantic within San Matías Gulf, where we find the Fort, which is the subject of their research. 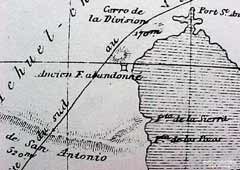 Cartographic material is one of the strongest supporting evidence of their hypothesis —in an atlas published in 1865 by Juan Antonio Víctor Martín de Moussy, a cartographer hired by Urquiza’s administration, the Fort is referred to as “Ancien Fort abandonné”. In six other contemporary maps of those times the site is marked as a fort.

Delphos Foundation decided to make various expeditions to the Fort zone. From December, 1997 to November 2006 more than 8 expeditions were conducted and oral testimonies and some material findings were obtained. 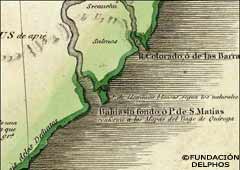 In one of the maps, which was drawn by the Spaniard Cruz Cano and that seems to confirm the Fort’s past insular condition, there is a reference to white men (“Island of White Men according to the Nation’s natives, in accordance with Quiroga’s travel maps”). Based on this information, the Foundation interviewed present inhabitants that recalled an ancient secret agreement made by their ancestors and some white men speaking a strange language.

As to material findings, in April 1998 the Foundation’s researchers found a block of dark granite or basalt 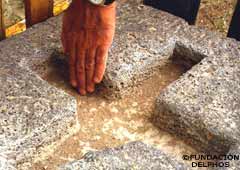 stone that bears a bass-relief showing an identical-armed cross, which they named “templar stone”.

They also discovered various “small tiles” or mosaics, triangular in shape and with a smooth side and a striated side, which researchers claim to have been part of the tiling of buildings in the fort.

Other elements found are lithographic findings which raise special interest, namely: a coin with a cross, a circle and a kind of crescent. 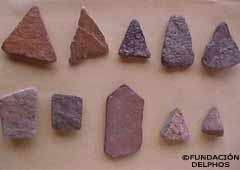 random but it is still hard to discern the presence of the Holy Grail in that remote spot of Patagonia.

Delphos Foundation seems to have reached this conclusion after reading several books and ancient manuscripts describing situations that can fit their hypothesis. But there is nothing conclusive that may reveal this “secret” as something real.

It seems that once again everything comes down to the personal decision of believing or not believing, clinging to some kind of faith as a shield or closing your eyes to avoid the radiant sunlight that bathes the Fort’s horizon and get carried away.