Southern Right Whales and Commerson’s dolphins share the habitat in the area of ​​ Valdés Peninsula. Know them in detail and enjoy your visit to this natural sanctuary. 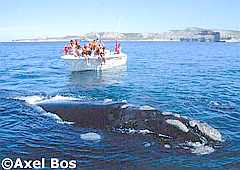 Whales are mammals perfectly adapted to sea life. They belong to the cetaceans species and, within this group, to the species of mysticetus, which are the ones with no teeth but fibers. Usually whales have belly furrows and a flipper on their back, but southern whales have none of that. Among the features that make them different from the others are the shape and size of their heads; their jaw being long and narrow occupies almost a quarter of their whole bodies.

Another feature typical of this species is the fact that when exhaling they blow out a V-shaped water stream that can be seen from many miles away.

The southern whale was declared a natural monument. Nowadays about 7,000 specimens inhabit all the seas in the south hemisphere, in lukewarm and pre-Antarctic waters. From them, about 2,500 are in the Valdes Peninsula area. Every year, between May and December, about 600 of them get to Gulf Nuevo and Gulf San José in order to breed. This kind can have an offspring every three years. The pregnancy lasts twelve months and the baby whales are suckled for two years. At birth they are between 4.6 and 5.5 meters long and about three tons heavy. 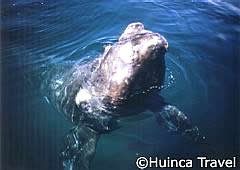 It’s important to know that, thanks to the protection policies carried on, every year the number of whales approaching our coasts increases and so does the time they stay here. In the days of the first watching expeditions, in 1971/72, they were only seen between the months of October and November. Currently the first ones arrive in May and stay even until January. If this progression goes on we’ll probably have whales all year long in a near future. To this, we should add the fact that the population grows an average 8% annually. If you want to learn more about the Southern Right Whale please click here. 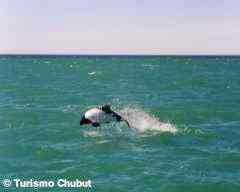 These are marine mammals just like whales, belonging to the cetaceans family but to the odontoceti species, meaning they do have teeth. Also they are found exclusively in the south hemisphere and especially on the Patagonia coasts.

They are distinguished by the contrast of black and white they have on their bodies: head, tail and flippers are black and the rest of the body is white. On their belly there is a black spot that is different according to the sex of the animal: drop-shaped in the males and horseshoe-shaped in the females.

Though they look strong built, perhaps for their short snout, they do not weigh more than 50 kilograms and are not larger than 1.5 meters. They are coast dolphins, they can be seen “surfing” on the seashore waves, or after the trail of some ship.

On the Argentine coast they are seen from Gulf San Matías to the coast of Tierra del Fuego.