Sierra Grande is located in the southeast of the province of Río Negro, on route 3 and at 1270 km. from Buenos Aires.

Its population is approximately 15,000 and its origins date back to 1890 when served as a post for travelers and cattlemen.

But the growth of Sierra Grande was due to the extraction of iron ore. The deposits were discovered in 1944 but not until 1969 did the exploitation begin by a public company, Hipasam. 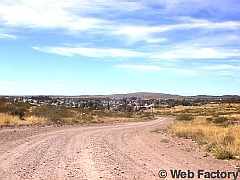 Unfortunately, later Hipasam went bankrupt and many of its inhabitants emigrated. It was one of the largest iron ore mines in South America.


As Sierra Grande is on the way to Puerto Madryn, if you travel by car, will have the opportunity to stop. Lodging and food facilities are available.