These Southern whales have been in danger of extinction at a time, and nowadays have come out of this situation after the hard work of several organizations. The number has increased, even though it is considered a vulnerable species and requires special care. 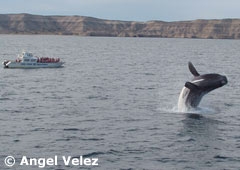 They are now attacked by seagulls. The reason for this is not exactly known, but it is thought there is an overwhelming number of these birds that multiplies as a result of the increasing number of places with fish refuses around Puerto Madryn. 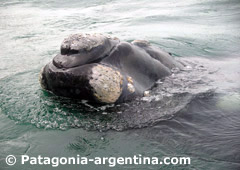 Each season, about 1,500 whales come to Golfo Nuevo. However, this does not happen at the same time; at the prime of the season, between September and October, they may come up to 600.

At Peninsula Valdes, each one of the whales and orcas is identified with a name, which appears in a catalog together with the characteristics that help spotting each of them, such as spots, bumps, the tail or the fin. There is a group that comes every season, among which Franca (the most photographed in the world for some) and Mel, an orca with an old scar that always comes hunting by Madryn, are among the famous ones.

How do whales spend their time while at the Peninsula? It is well known they come to reproduce themselves; it is the time to find a partner, copulate and, when they come the following year, finally give birth. We are not being quite specific when we talk about “looking for a partner”, as whales form copulating groups of several males and one female, as long as she accepts them. Certain moves (when they seem to be dancing) signal this event. 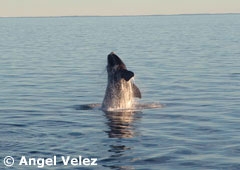 Apart from the traditional whale-watching excursion, with Puerto Pirámides as the departing point, coastal whale watching from El Doradillo Beach is recommended. Here the whales and their newborns gather for the first 3 months of upbringing. It looks like the smooth bottom of this piece of the sea attracts whales. A unique experience, which we emphatically recommend consists of the night excursion, when the absolute silence allows listening to the whales singing.