It is not certain who discovered Patagonia. Some say it was Americo Vespucio during his expedition in year 1502. However, the man who first spotted the inhabitants in this land, the Patagones, was Ferdinand Magellanin 1520. 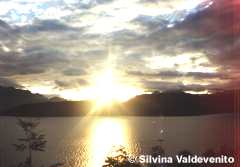 Elcano, the only survivor from that expedition returned to Patagonia in 1525. He, along with his men, was the first European arriving at what today constitutes Puerto Deseado, Puerto Santa Cruz and Rio Gallegos before heading to the Magellan Strait.

All these first men came in from the sea.

At the same time but from the north and from the Andes, other travellers and explorers began to arrive as well. Jeronimo de Alderete, a lieutenant responding to Pedro de Valdivia (conqueror of Chile) came through the Andes, at mid-sixteenth century, and arrived at today’s Neuquen Province’s lands. Other lieutenants like Francisco and Pe
dro de Villagra came in through the Villarica pass in the same region, circa 1553.

But when the Araucanos aborigines killed Pedro de Valdivia, everything came to a sudden stop for over a hundred years. It was only after year 1620 that the next expeditions dared to cross the Andes again.

What were these first confirmed explorers seeking?

Most of them wanted to get rich. Some by means of trading indigenous
slaves, others by finding the gold and silver hidden in some place. But there were also those who were after a myth: the City of the Caesars. This last reason was the engine powering Mascardi’s expeditions, who founded the Poyas mission at Nahuel Huapi in year 1670. Hernandarias was also chasing this myth when, in 1605, left Buenos Aires and got up to the Negro River.

The myth of the Caesars

“… the enchanted City of the Caesars is the last legend that died in America and the first that has cast a spell on Patagonia’s eternal solitude. During a 300 years period, this myth drove warriors and friars crazy, dragging them from one end to the other in the region, almost mesmerized…” This is how Enrique de Gandia, a historian, refers to this subject. Many Spaniards said they had actually been there, and there were aborigines witnessing the miracle.

According to Gandia, this myth is born during a journey made by Captain Francisco Cesar, in 1529, from Fort Sancti Spiritus in what today is known as the Santa Fe province, to Cordoba or San Luis. He marched towards the west with few men and returned after a month and a half. He must have almost surely collected news from the Incas aborigines which mentioned “treasures such as gold, silver and gems among many other things…”

And then many others came…

After father Mascardi, other voyagers arrived at the Bariloche area, like The Jesuits, who introduced the first sheeps in Patagonia, near 1703.

Also a Jesuit, father Falkner devoted an entire book to Patagonia, with the 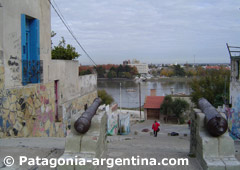 firm purpose of letting the world know about the region. After that moment Spain, with a greedy attitude, started to populate and fortify the once helpless Patagonian coasts. In this way, important towns were founded, like San Julian in the Santa Cruz province, San José at Chubut and Carmen de Patagones-Viedma in 1779.

A century later, in 1860, a Frenchman named Orélie Antoine I, self proclaimed as Emperor of Araucania and Patagonia. He was apparently a lunatic monarch who settled at the western Andes, attempting to form an Andean Kingdom to the south of what today is known as the Neuquen province. He even coined money and founded a dynasty that still exists in France.

The Chilean authorities arrested and expelled him.

Believe it or not, nowadays there are descendants of this King of Patagonia who show off nobiliary titles inherited from Orélie Antoine I.