Travelers and scientists are a different, special category of explorers. They no longer seek, like their predecessors, for gold or personal wealth. Instead, they are driven by the need of knowledge and the discovery of new species in order to describe the natural world that surrounded them.

Frenchman D’Orbigny and later Charles Darwin, the famous Englishman, were in Patagonia during the first half of the nineteenth century.

D’Orbigny devoted his efforts to the area at the Negro River Lower Valley, where he made important discoveries, particularly in the ethnological area. The naturalist Charles Darwin arrived in Argentina in 1832, aboard the famous Beagle ship that was commanded by Captain Fitz Roy.

That was just the beginning.

During the next two years, this English vessel performed thorough researches covering the whole of the southern tip of the country.

During this trip by Darwin, the phrase “damned land” was used by Darwin in order to describe Patagonia. Although it is true he used this description to refer to a particular area (the Santa Cruz river), he also made clear in many passages of his writings that he was totally amazed by the surrounding landscapes, which he openly admired. 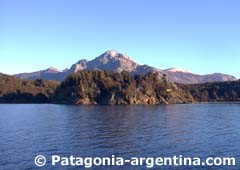 A bit later, during the second half of the nineteenth century, other well known explorers and scientists followed these first men’s (D’orbigny and Darwin) steps. At least two of them should be mentioned: Musters, who did not have a scientific background himself but compensated this with his skills and passion for observation, and, of course, the famous Francisco Perito Moreno, whose remainders nowadays rest at a small island in the middle of Lake Nahuel Huapi, surrounded by one of the most beautiful areas around the globe.