There are several hypotheses regarding the origin of the name Patagonia. The most plausible is related to one of the tribes of aborigines who lived there, although it has nothing to do with the size of their feet!

Before the arrival of the Spaniards, several indigenous groups populated the region.

The yámanas, and onas or selknam were in Tierra del Fuego. The continent was populated with the pehuenches, mapuches and tehuelches.

According to interpretations, the region owes the name to the tehuelches. Apparently they were very tall and with a well developed physique so the Spaniards called them “Patagones”, relating them to a giant called “Patagón”, a very popular character in some novels of those times.

Another version related to the origin of the word Patagonia also making reference to the tehuelches, but in this case it says that the name comes from the huge tracks they left on the snow, due in part to their physique and also to the fact that they covered their feet with skins. 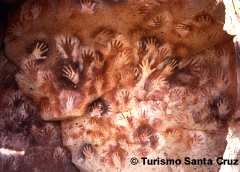 Today, most of the Patagonian aborigines live in reserves or work in estancias. The mapuches constitute the most numerous community, with some 35,000 people.

Rests of the primitive life of indigenous people are found in caverns with paintings and stone deposits called “picaderos” where even today arrow heads and different tools can be found.