This is the profile of one of the last explorers of the Extreme South: Father Alberto María de Agostini. 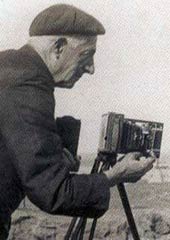 A link between the old explorers and the modern travelers, Father de Agostini is an example of tradition and modernity united in a single person. Like the first explorers he was filled with the spirit of adventure, a thirst for knowledge and an almost physical need to be in open, unpopulated space. But he practiced, like other people of the modern age, other pursuits connected with the new technology of the 20th century: photography, aviation and mountaineering.

And let’s not forget his vocation: he was a priest, a missionary with the goal of transporting his faith to the most isolated regions of southern Patagonia.

Father de Agostini was born in the northern Italian region of Piedmont, at the foot of the Alps, on November 2nd 1883. From his childhood he was an aficionado of mountaineering and hiking.

At the age of 26 he entered the order of the Salesianos as a priest and then left Italy to serve as a missionary is what was then one of the most exotic and remote areas of the world: Tierra del Fuego. 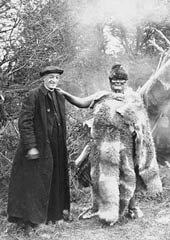 He arrived in Punta Arenas in 1910, which was a settlement being led by Monsignor Fagnano and already had other priests living there. Together they faced the enormous task of trying to save the lives and the culture of the last surviving Amerindians of the region: the Yamanas and Ona tribes. The situation was desperate. The introduction of cattle and changes to the habitat and lifestyle of the Yamanas and Onas was rapidly bringing about their disappearance.

The Salesianos worked to preserve the culture of these tribes, organizing them into mission communities. But they faced huge opposition from the most powerful families of the area, who needed the cheap labor of the Amerindians and did not care if this led to the destruction of an entire culture. 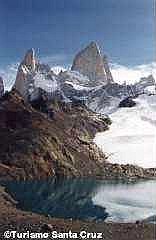 De Agostini worked intensely in the missions, but he dedicated all of his free time to exploring Tierra del Fuego and the mountains of Balmaceda and Paine, very close to Puerto Natales. The latter group he admired greatly, both for its soaring peaks and the natural beauty that surrounded it. He wrote:
“This is one of the most wild and spectacular of places. Forests, lakes, rivers, cascades, constitute the pedestal of this fantastic mountain castle, with gigantic strong walls, covered with armor of ice, exceeded by haunting spires that are able to seduce even the boldest of mountaineers.”

In 1929 de Agostini correctly described the circular formations of this mountain that had earlier been confused with a volcanic crater.

Later, the interests of de Agostini took him northward, toward the glaciers that empty into Lake Argentino, an area that before was practically unexplored. He arrived at the Mayo and Spegazzini glaciers, where he became preoccupied with finding a peak or elevated point where he could gain a panoramic view of the glaciers. 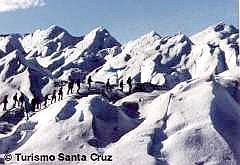 Therefore, along with the guides Croux and Bron and Dr. Egidio Feruglio he climbed Mount Mayo. They arrived on the 14th of January, 1931.

This is how de Agostini described the spectacle:
“A wonderful, indescribable panorama marked by the deep vastness of the horizon and by the sublime grandeur of the hundreds of summits… the first human glances that contemplate to these icy solitudes are torn between fits of joy and overwhelming withdrawal… The glance travels eagerly through that immense summit of ice and snow and the crystalline transparency of the atmosphere and the flashing light of the sun are even still more clear, and I try to scrutinize its secrets.”

With these same companions, he soon traveled through the passage of Continental Ice. They discovered glaciers to which they named, they were the first people to climb the surrounding peaks, they found green oases in the middle of the desolate and icy landscapes, until reaching the top of Monte Torino, from where they could see the coast of the Pacific. They returned from there by the same route by which they had arrived. Only in 1955, with advances in technology, were people able to arrive to the Chilean side traversing the mountains. 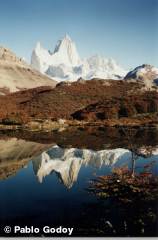 In connection with his task of discovery and exploration, he climbed the Fitz Roy mountain group, the most complex and imposing of the southern mountain range. He stayed in one of the estancias of the area and eventually settled there.

The following passage summarizes his impression of the mountain group:
“But the most imposing attraction is Monte Fitz Roy… He is the lord of all of this vast mountainous region, he is another Cervino, something more modest as for the elevation but not less imposing by the vertical drops of his walls and the majesty of his peak. The Fitz Roy is without a doubt one of the most beautiful and imposing mountains of the Patagonia Mountain range..”

In one of his many expeditions to Cerro Torre, the group in which de Agostini was hiking with had to make camp in the valley, near a great stone, and because of bad weather they remained there almost a month. Today, that stone is known as the Piedra del Fraile (Stone of the Friar) in honor the priest.

In 1937 the priest flew solo for four hours in a small plane, the saturn, across part of the mountain range. 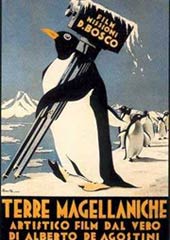 Chacabuco rivers and lasted until reaching the limits of the mounta
in range. In this stage of his writing he concentrates more on the human than geographic aspect of the area. He warns of the extreme isolation that the settlers face, which leave them at the mercy of bandits.

There was only one thing missing from making his life complete: ascending the Cerro San Lorenzo, which he attempted in 1943.

In addition to his detailed descriptions and his emotional accounts, de Agostini was also an aficionado of photography, and participated in various contests using photos taken during his travels. He also made two films, “Tierra del Fuego” and “Tierras Magallánicas”, documentaries that to this day are still distributed in America and Europe.

Father de Agostini died on Christmas Day, 1960 in the home of the Salesianos in Torino.

Recently an interesting book has been published that narrates the history of this adventurer, whose author, Germán Sopeña, is also a great admirer of the same natural beauty that captivated de Agostini. The book is entitled “Monseñor Patagonia” or Monsignor Patagonia.