The story we want to tell you today is that of one of the most spectacular shipwrecks in the waters of the End of the World. The Monte Cervantes was a cruise that made the route Buenos Aires /  Puerto Madryn / Punta Arenas / Ushuaia / Buenos Aires. In January 1930, with 350 crew members and 1200 passengers on board, it stranded against rocks.

Despite the distances and the great differences between the Monte Cervantes and the Titanic, there are some surprising coincidences: On one hand, the luxury and sumptuousness of the ship and its passengers. But also the dramatic situations that were experienced during the sinking, and the death of the captain, which nobody could ever explain exactly.

The History of the Monte Cervantes 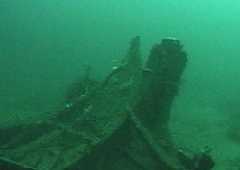 The Shipyard that built it was Blohm & Voss, from the German company Hamburg Sud (Hamburgs Sudamerikanische Dampfschifffahrt Gesellchaft). Between 1922 and 1923 the company ordered the construction of the “Montes” to the shipyard Blohm & Voss. They were going to be vessels destined to the transport of emigrants, cargo and temporary transportation of workers from the Iberian Peninsula towards South America. The ships were baptized with names of mountains of Tierra del Fuego:

All of them had unhappy endings. Some were scrapped, others were sunk and Mount Cervantes still rests in the icy waters of the Beagle Channel, where Tierra del Fuego ends and the Antarctic begins to glimpse.

The interior of the Cervantes was designed with comfort typical of the first class cruises, with sumptuous rooms decorated with style, capacity for approximately 450 people, a second deck with more than 200 chairs, smoking room, libraries and reading rooms fully equipped. A total luxury for those times. Two new stopovers had been added to its  original route which made it even more seductive: Puerto Madryn and Yendegaia. The stay in Ushuaia would be about 15 hours with the possibility of visiting, among others, the city, the sawmills, the jail and Mount Susana. Who could imagine that the stay in Ushuaia would be so traumatic and long!?

Mount Cervantes sailed from Hamburg (Germany) at the end of 1929 with 1,117 passengers and about 330 crew members. On January 21, 1930, it would dock at the Port of Ushuaia (Argentina) and the next day it would sail towards Lapataia Bay, specifically about 7 nautical miles, to Yendegaia Bay. Unfortunately, about some 9 miles from the Port, the fatal accident occurred.

On the different versions of how it was, this is the conclusion reached by the German newspapers, after an investigation conducted in that country and taking into account the extensive statement of the crew and the evaluation of the facts. The following story was taken from the book “Monte Cervantes and Captain Dreyer”, Shipwreck and Death in the South of Argentina, by Adriana Pisani:

“…Captain Dreyer intended to go through the channel “Les Éclaireurs”. He recommended that the Second Officer paid attention when marking the Lighthouse 140 degrees to the right and Mount La Gloche 21 degrees, and then change the course on the canal. At 12:35 the mentioned points were seen, the course was modified to the south and at 12:42 according to the map the appropriate course was taken … three minutes later it crashed … to starboard against a rock below the water line, so that the ship leaned considerably to port … straightening up later. When it broke free from the rock it began to sink. The engine stopped… Dreyer told the First Officer to immediately release the boats…”

“Monte Cervantes is sinking. In the background, the Les Eclaireurs lighthouse… All passengers were landed in Ushuaia in perfect condition and most of their belongings have been saved. It is estimated that refloating will be carried out in the next few days … In spite of everything, the attempts to set Monte Cervantes free have not been successful… ”

Almost immediately after, other information left everyone with sadness…

“Last night (January 23), being 9:00 p.m., Monte Cervantes quickly turned on starboard giving barely enough time to save the guard personnel … We must regret the disappearance of Commander Dreyer who remained on the bridge until the sinking of his ship, submerging with him …”

Other versions speak of a strong impact, cracking of metals and a vertiginous length that wounded the ship to death. Some data indicate that there was a course of more than twenty meters. Augusto Schwagermann, representative of the Hamburg insurance company, said: “…the course was at the bottom of the hull on the surface of the water, the bow pantoque and the stern and part of the rudder stand out…”

Ushuaia had in those years a population of no more than 800 inhabitants. We can imagine the enormous impact that these 1500 new people had in the city. The inhabitants of Ushuaia reacted quickly to the tragedy and helped passengers and crew. Each Fuegian home, each public building, including the Presidio, had to be adapted to provide shelter and food to the survivors, who represented almost twice the stable population of the place, for almost a week.

The mysteries of Monte Cervantes

The shipwreck left a series of mysteries that are already part of the history of this sinking. One of them is the true whereabouts of the captain, since his body was never found. There are stories that tell that he was spotted disembarking on the Navarino Island an alleged shipment of gold that was never found. Another unanswered question is why the navigation route was modified. And like these, there are many more questions unanswered.

Finally, we want to add that today the wreck of the Monte Cervantes has been declared Cultural Heritage. Until some time ago it was one of the most attractive dive sites of the Beagle Channel and also one of the most difficult: for its location, for the weather, for the water temperature and for the depth at which it is located. Now, turned into a protected area, diving here is no longer allowed.

The idea of ​​this article and the authorship of most of the texts is by diver Marcelo Pierini, an attentive contributor to this publication, and a member of Patagonia Diving Tech.

Vacation packages to History Of Patagonia starting at USD 1.120
A week at the End of the World Best Tours Included
Ask now!