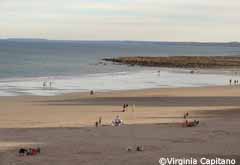 Did you know there is a sea resort in Patagonia, on the Atlantic Ocean which has got the warmest waters in Argentina? Come and discover Las Grutas with us. Know how to get there and its attractions.

Las Grutas is a beach resort located in the Atlantic coast of the province of Río Negro, only 15 Km. from San Antonio Oeste, district it belongs to. Its history is a short one but full of present.

It is said that the first house in Las Grutas was built in 1939 by people from San Antonio Oeste. But only in 1964, after the allotment of the land, this beach village started to spread widely. In the 80’s it got a great backing from the investments coming from people from different cities of the region and then the official support with the arrival of the essential services such as water supply, electricity, etc. 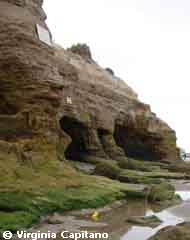 The name comes from the caves undermined by the sea in the cliff.

Its beauty resides in a beach sheltered by the cliff, and mainly the warmth of its waters, which can reach 25 degrees Celsius in some areas.

No doubt it’s the hottest beach village on the Patagonian coast. Its growth in the last years has been huge. It already looks like a small city. With an infrastructure installed according to its visitors, Las Grutas is a paradise for those who love long days of beach and sun.

Its main attractive consists of its magnificent beaches, white sand and deep blue, transparent waters, which are the warmest in Argentina. 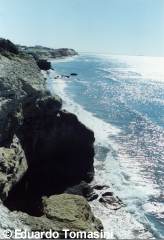 Being in the very heart of San Matías Gulf, and having medium sized cliffs, this place has little or no wind at all, something incredible for Patagonia. The width of the tides, the system of circulation of the coast currents, the high temperatures in summer and the scarce rains are contributing factors to this phenomenon. 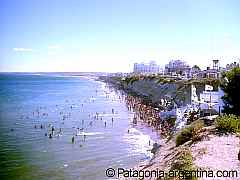 Buses:
Some of the companies that go to San Antonio Oeste and Las Grutas are:

We strongly recommend to contact them to have up-to-date information about
fees, services and promotions.

Las Grutas is an important tourist center and it has a wide assortment of hotels, ranging from 1 to 3 stars. There are also excellent Apart Hotels, some of them with the time share system. It is very common renting houses or flats per day, week, fortnight or monthly.

Campsites are very well equipped and many of them are located at the very heart of Las Grutas. 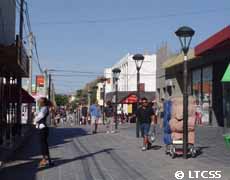 Las Grutas itself is not very big and everything is at reach around a few blocks from where you will be staying, you can walk around and see the different food offerings. Notice that the specialties are fish and seafood, mainly “pulpitos” (small octopuses).

What to see around Las Grutas?