This text was submitted by a group of students from an elementary school from Greater Buenos Aires. It is a Salesian school named precisely “Ceferino Namuncurá”. They traveled especially for the beatification and this is their report from the point of view of the youngest ones:

We left at 10:00 in the evening from our school, Ceferino Namuncurá, in Florida, Buenos Aires province, with a group of 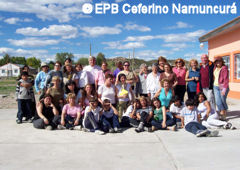 teachers, catechists and our parish priest. The trip was very long.

We arrived in Darwin at 6:00 in the morning. We stayed at Darwin’s school. It was small but very cute and comfortable above all… They welcomed us with a delicious breakfast and after that we had some free time and we played. We toured Darwin and later we went to Chimpay. At church, we met Ceferino’s miracle girl, who told us her story.

On Sunday we went to the beatification ceremony, in which there were Ceferino’s relatives who spoke in Mapuche language and their pieces of advice were translated; there were a lot of people: some of 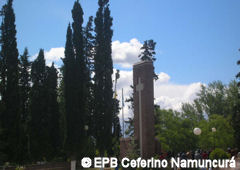 them were Mapuches dressed in ponchos; there were also TV cameras. The ceremony was in the open air; it was windy and dust flew; but it was not cold because it was sunny. The mass was celebrated on a stage. There were two images: one of the Virgin Mary and the other of Ceferino, which was covered until the beatification, and uncovered when he was declared Blessed by a Pope’s envoy. People were happy and touched. Ceferino’s miracle girl was present at the ceremony.

We were a group of seven children from 5th grade of elementary school and at the end of the ceremony a priest blessed us.
We came back to Darwin to take the bus back home, but first we said farewell to the children that housed us in their school and we gave them a banner with a message from our school, Ceferino.