The Victoria was one of the five vessels to circumnavigate the world for the first time between 1519 and 1522, led by Ferdinand Magellan

and Juan Sebastian Elcano.
Ferdinand Magellan’s Fleet consisted of five ships or naos (Trinidad, San Antonio, Concepcion, Santiago and Victoria), but the only one that came back to Spain three years later, half wrecked, as if it were a ghost, was the nao Victoria. From the 234 sailors that started the journey, only 18 survived and Magellan himself died fighting in the Philippines.
On March 31st, 1520, the fleet anchored in San Julian, where an unsuccessful mutiny resulted in one decapitation, two exiles and death penalty for 40 men. In fact, the death penalty was not carried out and one of the men, Elcano, was the one who finally circumnavigated the world leading the Victoria.

In the Shoes of a Sailor

When visiting downtown San Julián, it’s a must to stop by the Nao Victoria Museum, a real size replica of the only ship from Magellan’s 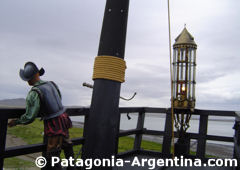 Fleet that achieved the first trip around the world.
By recreating the engineering and presenting rigorous lines of argument, visitors can revive what the sailors experienced during the events that took place in the mythical San Julián Bay. This is achieved through the use of surround sound technology, reproductions of daily objects, navigational and artillery instruments, as well as “animatronics” of some of  Magellan’s Crew characters. 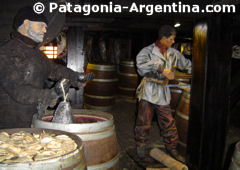 For the 500th Anniversary of the Discovery of America, Spain recalled the Age of Discoveries in their world expo Sevilla 1992. On that opportunity, various ship replicas were built to evoke the ones used during the Conquest of America.  One of them was the Nao Victoria, which was anchored off the coast of Guadalquivir.

More than a decade later, on the Island of Cartuja, the Nao Victoria replica set off on October 12th, 2004 from Delicias wharf headed to Japan.  The first part consisted in crossing the Atlantic Ocean into 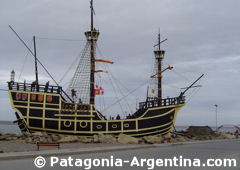 the Pacific Ocean through the Panama Channel. To complete the circumnavigation of the globe, the nao sailed through the seas of Japan and China, the Indigo Ocean, the Red Sea, the Suez Channel, the Mediterranean Sea, the Strait of Gibraltar and the Guadalquivir river. It was anchored for a year and a half in Shanghai before returning to Sevilla, as a symbolic link between the World Expo 2005 and the one that took place in 2010 in that Asian city.