It constitutes a compulsory tour when you travel to Mendoza. The constant presence of high mountain peaks in the far horizon constitutes a great attraction that invites the passenger to enter a world of giants. 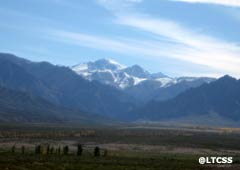 You will be able to enjoy an ample variety of landscapes: the river Mendoza, the plain in which the city is found, valleys between the mountains, the smaller summits of the pre-mountain range until reaching the highest summits of the Andes.
The trip will be long, therefore, we recommend you to depart from the city early in the morning. 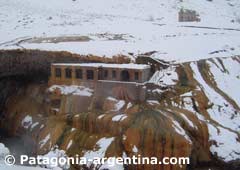 The trip begins in Mendoza, leaving the city through the National route 7, an area filled with small farms and vineyards. Soon after, following the route that skirts the winding course of the Mendoza river, and catching sight of El Cordón de Plata right ahead, you will leave the countryside behind in order to enter the pre-mountain range area. The first stop will be in Potrerillos, a small mountain town, with weekend residences belonging to the inhabitants of Mendoza.

Thence there is an unbeatable view of the Potrerillos dock which forms a breathtaking artificial lake. The following section of the route leads to Uspallata, framed by mountainous landscapes with changing colours, filled with varied formations and many tunnels in the route. The famous film ‘Seven years in Tibet’ was filmed in this valley.

The trip continues towards several other small mountain towns, Polvaredas, Punta de Vacas, Penitentes, until reaching Puente del Inca, a place filled with natural and strange formations that has thermal waters. The ruins of the first thermal spring hotel, built in 1917 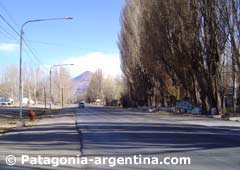 and destroyed by an avalanche in 1965, can be seen.
Aconcagua, the giant watcher, will become a distant companion during this part of the way while you travel towards Las Cuevas, the limiting border with Chile, which is 3150 mts above ocean level. If the climate and the route conditions allow it, you will continue through a secondary route until arriving at El Cristo Redentor, an imposing monument devoted to peace, found among high summits. You can also reach the access to the Aconcagua Provincial Park, which is 4km away from Puente del Inca.

The return to the city of Mendoza goes, again, through the paved National route 7.

Note that even though this excursion does not require special clothing; it is important to take into account that while in the high mountains, warm clothing is necessary (even in summer).