Wine road is one of the best features of Mendoza, it shows the richness and the working skills of its people 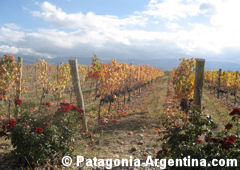 You cannot visit Mendoza city without making a tour through the wineries zone and the big country houses that surround it. Most of the establishments are open to the public for tours and with an extra fee, you can attend a tasting. To make an approach to the world of the elaboration of fine wines constitutes an adventure not only for those who know about the subject.

Actually there is not only one Wine Route but there are as many routes as wine cellars you decide to visit. Since there is a large extension of land dedicated to grape crops, the area has been divided into four large areas known as grape oasis: The Center-West Oasis, where the cellars that are closest to the city are located, the East Oasis, in the Tunuyán river area, the South Oasis, in the municipalities of San Rafael and General Alvear and the Oasis of the Uco Valley, which is also in the bed of the Tunuyán river, only a bit higher, with the Tupungato volcano as a background.

Many Wine roads have been developed in each of these oasis, each road implies a departure at noon from the city of Mendoza. The Southern Oasis and the Oasis of the Uco Valley take the whole day because of the big distances.

Most of the establishments of the Center-West oasis are within  a distance of 30 km from the capital. There are many wine roads in this area and many establishments to visit as well.

In the area of the Maipú District there are two large areas, one that is furthest from the Mendoza river and the other one is located over the cliffs. The first area is where the following wine cellars are located: El Enemigo de Casa Vigil, Rutini, López, Santa Julia, Tempus Alba, Triventu, Trapiche y Viña El Cerno being the latter a small but charming cellar whose owners provide a tasting.

The Flichman state and the Cruz de Piedra cellars are located in the area of the cliffs. One of the oldest chapels in Mendoza, the Our Lady of the Rosary Chapel is located nearby.

Towards Luján de Cuyo, there are the Bodegas Etchart and Chandón, both owned by French families. Also in the area are Arizu, Séptima, Ruca Malen, Tierras Altas, Belasco de Baquedano, Roberto Bonfanti, Cobos, Renacer, Carmelo Patti, Balbo, Alta Vista, Cruzat and the newer and Dolium which is not as widely known as the ones mentioned before but it is the first to be in the form of a boutique, a very exclusive underground wine cellar.

Norton and Cabrini are located on the highest part of this area, being the latter a traditional mass wine manufacturer and it also provides the Vatican with wine.

While still within the limits of this oasis, in the Chacras de Coria area you can visit the Lagarde, Catena wine cellars that belong to a traditional Italian family and Viña Amalia, a little establishment devoted to non industrial production.

Finally, while in the area of Vistalba, you can visit a beautiful valley that has a view to Cordón del Plata. The Nieto Senetiner and the new Domaine Vistalba and Pequeña Bodega are found there.

The East Oasis by the Tunuyán river is the one with most of the production but it is the one that has least developed wine routes for tourists. The only establishment you can visit is Bodega La Agrícola.

You will need at least one full day to get to know the South Oasis which is on the foot of the mountain range by the Atuel and Diamante rivers. White wines are traditionally produced in that area. The main wine cellars are: Bodega Valentín Bianchi, Bodegas Balbi, Bodega Suter and the modern Bodega Jean Rivier.

The last oasis is the newest undertaking. It is the area of the Uco Valley, in the Tupungato, Tunuyán and San Carlos municipalities that have the Tupungato volcano as background. It is a high valley at 900 and 1500 m.a.s.l. that produces excellent varietal wines. The following wine cellars are located here: Salentein, Lurton, Estancia Ancón and Finca La Celia. To tour them you will need a full day.