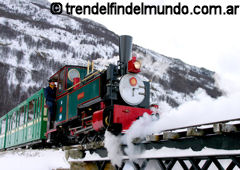 The Train of the End of the World is one of the biggest Ushuaia’s attractions.

This train’s history is, as almost everything else in Ushuaia, linked to the prisoners of the mythical jail in this city. It’s true name is “Ferrocarril Austral Fueguino” (Southern Fuegian Railway) which, along with the jail, are tourist icons of the city at the End of the World.

The engineer Catello Muratgia began definitive construction of an adequate prison in 1902. The prison was built using local materials, and labor was provided by the convicts.

For the transport of materials, a xilorail was mounted, that is to say, a train which circulates upon wooden rails. At the end of 1909 the first railway movements were recorded. The “Decauville” rails with a 60 centimeter gauge were put into service and the work of the “Prison Train” began.

In 1952 the “Prison Train” was decommissioned and with it the rude voices of those inmates faded away. Forty two years after its last service, in 1994, the southernmost train in the world, the “Prison Train”, retakes its historic path, reconverted into a fantastic Tourist attraction.

An elegant and antique formation of heated wagons, with wide windows and pulled by a steam locomotive, will take you along a 8 Km. long tour departing from the End of World Station up to the Tierra del Fuego National Park Station. The round trip total time aboard the Train at the End of the World is 1 hour 40 minutes, approximately.

Most of the way you will go bordering River Pipo. This will allow you to see a reconstruction of a yámana settlement (aborigines of the region), while you enter a dense and beautiful wood of coihues and lengas, meaning that you are already inside the Tierra del Fuego National Park.