The island of  Tierra del Fuego was inhabited by two large groups of aborigines: the Selk’nam on the mainland, and Yámana, who lived most of the time on canoes in the canals and the coast.

The Selk’nam, better know as onas, belonged to the Tehuelche race. They excelled as hunters of guanacos, on which they based their economy.

Body paint was one of their most important cultural expressions, as well as the male initiation through the Hain Rite.

They did not have chiefs, only an elite of “shamanes”, wise men and prophets that enjoyed privileges and social recognition, inspired in the fear of the supernatural.

They did not have a structured religion and feared death by sorcery.

The estimated population before the European arrival was estimated in 10,000 in the whole island (17th. Century). But in 1919, 50 years after the white settlement in Tierra del Fuego, there were only 350 natives left. At present this race does not exist. The last direct descendant of the onas died a few years back. 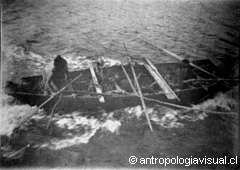 Fuego. They fed with mollusks, mussels, crabs and fish. They moved in canoes made with bark. The canoe carried the whole family on board, while the man with harpoon in hand waited for the prey, the woman rowed and the children kept a fire burning in the canoe on a base of soil and stones. They lived in huts made with branches, that had an excavation in its center, so they were semi-underground. They wore seal or otter skins.