The Mapuche (people of the earth, in their language) was one of the major aboriginal groups in Patagonia. They arrived in Patagonia Argentina from Chile, where they originated.

They were collectors and hunters, but one of their most relevant feature is the importance they give to language and literature as a way of preserving identity.

Subsistence was based on the hunt of guanaco and ñandú (ostrich of the  pampas); they also collected roots and seeds with which they elaborated flour.

They were nomads between the plateaus and the coast and here they collected seafood and hunted marine mammals.

They worked the leather with stone tools and fabricated boats, textiles, clothing and also built their own living facilities. These were tents divided in two compartments, one for men and the other one for women and children. 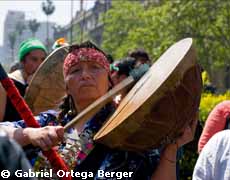 The mapuches had their own calendar, which they still use today for their festivities. For them the year begins on June 24: the same as other cultures in the world.

This corresponds to the day after the longest night of the year.

As to religion, their God is called Nguenechen, creator of all living things, that dominates the earth as king and gives life and fertility to men.

They also believe in some Evil being called Hualicho or Gualicho.

The mapuche language, as the majority of American aborigine language has no written alphabet. The transmission of histories and legends was done orally.

With the arrival of the Spaniards, and mainly with their interest in the conversion of the indian people, the first mapuche dictionaries and grammar were produced. The sounds of the mapuche language were represented with the Spanish alphabet and some auxiliary signs.

Today, there are several mapuche dictionaries, among them the one by author Esteban Erize can be recommended.