Professional adventurer, our columnist Mariano Fernández Soler tells us his experience the first time he slipped on a pair of skis. Read this note, you will have fun and you will surely be encouraged to discover the infinite pleasure of gliding on the snow. 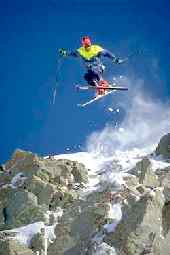 The story begins when, together with an adventurous companion who officiated at the same time as tour guide for the debut in this sporting activity, we hired a tour and left for Chapelco.

The first day I was awakened at 7:30 and they told me : “We are going to have breakfast so we take advantage of the day”. One thinks that skiing has very strange schedules since outside it is still dark and it snows. After waking up, one dresses putting all the clothes on, thinking that skiing is a sport for penguins. Big mistake, we’ll see why.

When we get to the tracks we go to the place where the equipment is rented. There, an expert in the matter measures our height and asks us how tall we are. In my case, they gave me a pair of skis long enough to build a bridge, of 1m90 long. The explanation came later and is simple: the more novice you are, the longer the skis are because they provide more stability.

Another issue are the boots. They are made of rigid material and have inside a kind of smaller boot of soft material. The function of this footwear is to keep the foot in a comfortable and safe position to ski. And the first thing you feel, is that the boots force you to walk with your knees bent, as we will see, one of the first lessons of skiing.

How to put on the skis? 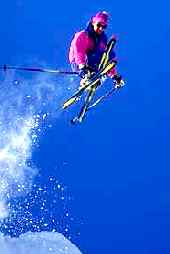 Answer: With the help of someone … First you have to place the skis on the floor in parallel and then place the tip of the boot of one leg against the ski toe. Then the sole of the foot is supported and finally it is pressed against a lock that the ski has. Once the first ski is placed, the feeling is very strange, because our foot grew a couple of meters and the maneuvers while standing become more complicated, and at the same time more funny. It also happens that we slide forward or backward without wanting to, with a panic proportional to the slope in which we find ourselves. To remove the skis, it will be enough to bend down and tighten a lock that the ski has and that will make jump the boot of its fixation.

When skiing you do not have to worry about avoiding a fall. It is less painful and more fun to fall in the snow than to make a bad move to avoid it. In addition, the skis used for beginners have less “jealous” fixings, that is to say, that when falling, the ski will jump of its position with more facility, to avoid bad movements or twists.

The first thing you learn is to adopt a ski position that gives us the domain and allows us to stop when we want. It consists of flexing the legs a little and putting the heels out and the tip of the feet inwards. This will make the tip of the skis close and allow us to brake, which is the most important ski activity for novices. Once this is learned, you are taught to bend. That is achieved, always with the same movement, overturning the body weight towards the opposite side of the one that wants to bend. That is, if we want to turn to the left, we will dump our weight on the right ski, and the opposite to turn to the right.

With these rudiments, one is already in a position to “manage” the skis and go where one wants, supposedly.

When one has already learned the rudiments, how to brake and how to bend, is ready to go to the slopes, to unfold the newly acquired skills. For that, three types of lifting means are generally used: the poma-lift, the chairs and the cable cars.

The “poma” are sticks hanging from a cable rail, which end in a plastic disc to engage with the legs and “sit”. These sticks make you ski up, that is, climb the mountain sliding uphill. That is not as simple as it seems, so, in general, it is reserved for skiers that are a little more seasoned. Anyway, the way to climb is to keep the skis parallel and within the “footprint” that is formed by continuous traffic and, above all, not lose your cool if you fall, it will only be necessary to run a little to the side and see if you can go down skiing or fish another “poma”, which, in general, is quite unlikely.

The second and most used means of elevation are the chairlifts, which consist of suspended saddles that are moved by a tractor cable. There are for two, three, four and even five people. In those with greater capacity, it is convenient for the novices to request to travel “on the window side”, that is, at the ends, because when they get down they will be able to grab hold of the handrails.

In the event that somebody falls, there is usually an operator that will help to get up. Not to worry because there is a time between one chair and the next. If we can not get up, normally the employee will stop the next chair, but if after a while we are still on the ground and have not stopped the traffic of chairs, the best thing is that we try to crawl to the side, being careful not to raise the head.

Finally, the cable car is a kind of cabin, in which the skis will have to be dismounted to get in.

The next step in the classes, probably the next day, will be to do what is called cross-country skiing. It consists of descending wide slopes in zigzag, so as to avoid reaching speeds that are not very recommendable at this stage of the training.

When one already masters these skills, you can make some easy track of the “moderate” category. In the maps of the tracks, in general, those marked with green color are for beginners, with very smooth slopes and long distance.

Skiing is a beautiful sport but it is necessary not to take more risks than those one is capable of facing. Do not get carried away by groups that want to go to the most difficult tracks by the mere spirit of adventure, without even knowing how to break. The most likely consequence will be that, after seeing the slope from above (they look much steeper than from below) and get scared white, you have to start walking down, with the skis on your shoulder and quite disappointed. Believe me, something like this happened to me.

As we said before, it is not necessary to put all your clothes on top. What’s more, if we do it, we will most likely feel very hot, because we will be doing a great physical effort, plus the nerves … Surely we will regret having brought the polar, the diver and the two t-shirts.

The right amount of clothing will depend on each person, but in general, three or four things are required. These are essential:

A comfortable coat, which, according to the weather must include a hat or hood.

Warm clothing but light, where possible, made with materials called “thermal”.

Sun glasses, because the reflection of the snow on sunny days it hurts the eyes.

Cream with sunscreen and cocoa butter pencil for the lips, if possible, also with protector.